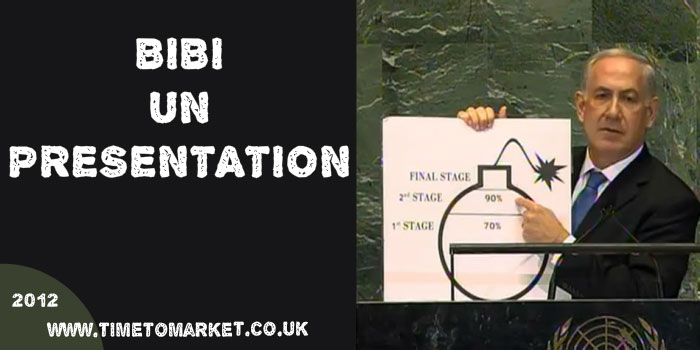 In his presentation to the UN this week he deployed a cartoon-like drawing of a bomb. The drawing was annotated:

Then, with a red marker pen the Prime Minister drew a line between the second stage and the final stage. That indicated the 90% progress made by Iran with their nuclear bomb capability.

It worked. So, Bibi’s bomb has become a talking point. Such a simple device in his presentation made the assembled diplomats sit up and take notice. It also caught the attention of the world’s media.

But, the Prime Minister is no stranger to using graphics in his presentations. He used them to show the complexities of national debt when he was Israel’s finance minister. It’s altogether far more adventurous than this Ban Ki-Moon speech from the Secretary General.

A while ago he used a tablet computer, hooked up to a screen, to illustrate his government’s achievements. Neat.

It’s simple and effective presenting and it seems to work. Perhaps he’s passed on tips to Prime Minister Modi with his style of government by PowerPoint.

It’s always good to spend time with your presentation material planning. Not least because you can be so effective with the right choice of materials and/ or props.

Please don’t hesitate to contact us for practical support with your presentations skills training needs.