A chance to speak at a TED (Technology, Entertainment, Design) event in California is classed as an opportunity for any presenter. When that opportunity comes with the added boost of a $100,000 TED prize then you know it’s special. And that probably describes Jamie Oliver’s TED 2010 presentation. Special. 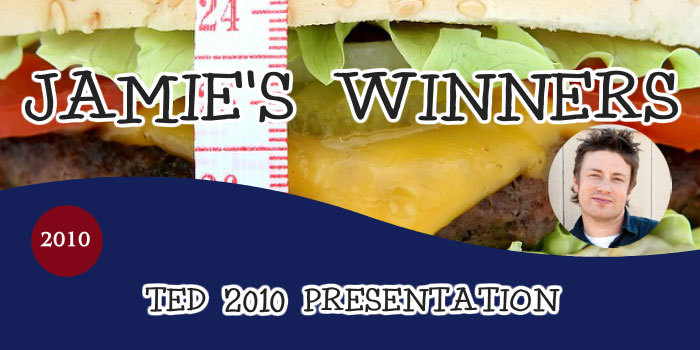 Devoted to “Ideas worth spreading,” the TED organisers awarded Jamie Oliver’s diet campaign the 2010 TED prize at their conference earlier this month.

Jamie Oliver is not the best speaker. His tv performances certainly benefit from the odd second take…or more. But what he lacks in speech structure and language he more than compensates with imagination, creativity and passion. And it’s that passion that really struck home with his presentation audience.

His 18 minute presentation had a shaky, nervous start. Then after a minute or so he warmed to the task. His hand-carried notes were not needed. He presented a series of winners.

He’s not afraid to use numbers. Obesity costs the USA some $150 billion annually. And that figure will rise further. The top killers in America are diet related–not the usual scary suspect: homicide.

But, putting things in perspective, said Jamie, “England is right behind you. As usual.” This got a huge laugh from his audience. A perfect delivery.

His use of media was excellent, with film of the Edwards family in West Virginia and some schoolchildren guessing the names of vegetables! The point was made. If they don’t know what it is, they simply will not eat it. Ever.

His demonstration of the size and scale of sugar additives in children’s school milk was well-worked. Tremendous imagery with a wheelbarrow load of sugar. That imagery fits very neatly with the findings of the Professor Lustig speech in 2011.

Really great stuff. Because part of his charm as a presenter is that of “the innocent abroad.” But his reference to Mrs Obama’s campaigning underlined the connections that he clearly enjoys. Catering for the G20 Summit in London last year proved valuable for the campaign.

So, this was Jamie at his best. Yes, he looked over his shoulder at the screen for inspiration. And his presentation lacked structure. But he firmly engaged with his audience and left them with something other than a take-away.

You can always discover plenty of public speaking tips with our series of posts, podcasts and videos. And, with more than a hundred tips, there’s something for every occasion. But when you want to hone your public speaking skills, then please don’t hesitate to get in contact.