PowerPoint slides might not be enough to get your business case approved at the next Board meeting. But, there's plenty of evidence that PowerPoint slides are used throughout world governments. Because only today we've come across recent PowerPoint slides used by Her Majesty's Government. It was these slides that were used to encourage other governments to take action against Russia. Amazingly powerful PowerPoint! 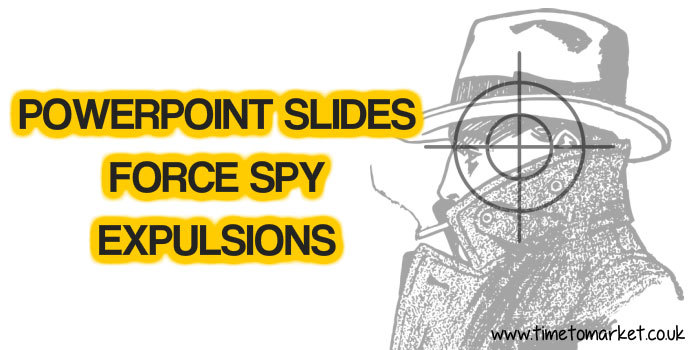 Now we know that In India, Prime Minister Modi encourages government by PowerPoint. And we've seen how a Pentagon PowerPoint Presentation pointed to Bin Laden's hide-out. And we also reported on a GCHQ presentation leaked by the fugitive Edward Snowden. But these PowerPoint slides are the first diplomatic briefing that we've spotted from the British Government. Albeit, we must say we found them on a Russian website. Are we on the receiving end of misinformation? Probably not.

But are they worth the wait? No, not really. Because, apart from the sheer horror of the chemical weapons attack in Salisbury, there's not much to say for these PowerPoint slides.

There are only six PowerPoint slides in the slide deck used by British diplomats to brief other governments on the status of the Salisbury nerve agent poisoning. And one of those PowerPoint slides was the title slide.

Visually the PowerPoint slides are uninspiring and lack any element of design ability. They certainly appear to be from the bottom drawer of PowerPoint capabilities. But, they do seem to have done the job. A satisfactory briefing followed by a slew of Russian diplomat expulsions.

The first proper slide presents a timeline for the Salisbury poisoning. It's text heavy and certainly sets the scene for all the other slides to follow. There really is no indication at all that they followed presentation design advice when they created these PowerPoint slides.

The two PowerPoint slides that followed were, once again, text heavy. But this time we had text rich bullet points. Lots of bullet points and images to the right side of the page. Two of these images are purely incidental as they don't appear to make any contribution to our understanding. But the body image certainly helps our understanding of the effects of Novichok  on the human body. If only the corresponding bullet point weren't there.

A Presence Of Design In This Presentation

The penultimate slide has the whiff of design to it. It show a continuum of Russian State interference in Europe, the USA and elsewhere in the world. We can only guess at why the blue hexagons were selected to illustrate the slide. Do the scientists use hexagons to illustrate bio-chemical nerve agents? Perhaps they do. Or, rather unkindly, is the hexagon one of the standard PowerPoint design elements? We leave it to you to decide.

So, with the final slide we returned to the conformity of bullet points on the left side of the PowerPoint slide and incidental images on the right side. But, on this occasion we were treated to three images on the one slide. Simply odd.

So the facts might still be a bit murky about the act or actors involved in Salisbury. And doubtless painstakingly slow investigation is set to continue for some time. But we can be absolutely positive that these PowerPoint slides aren't about to win a design competition. However, they achieved their presentation mission. Because that's no bad thing.