Osborne Speech Under Budget In 56 Minutes

The Chancellor’s 2011 Budget speech in the House of Commons extends a public speaking tradition from the 1720’s when Sir Robert Walpole presented the first annual national budget. 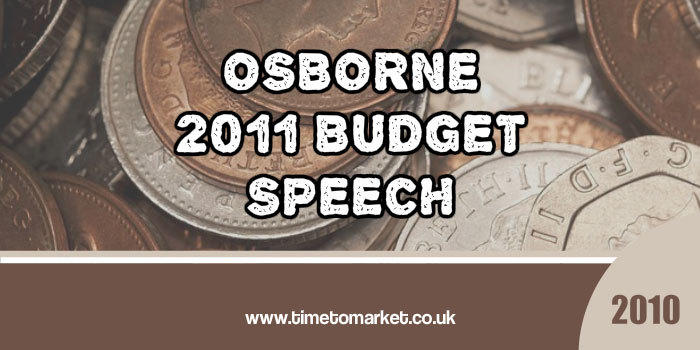 His 2011 Budget speech, timed at 56 minutes long, was well within budget. The shortest was a speech by Benjamin Disraeli timed at 45 minutes in 1867 and the longest…four hours 45 minutes by William Gladstone. An epic that would undoubtedly have had several members of the House asleep at its conclusion.

Yesterday’s speech maintained the continuity of George Osborne’s speeches since his emergency budget speech of 2010. Short and sharp sentence construction, a smooth pace and an improved delivery.

Classic Beginning For The 2011 Budget Speech

His beginning was a classic. Referencing last year’s speech he contrasted last year’s budget as an emergency budget and this one as a reforming budget. A neat contrast…even if it stretched belief somewhat.

His listing techniques paid off with some good use of repetitive phrases:

The language of a budget speech isn’t racy. But there were some moments in this speech that benefited from some good imagery. We had:

We gambled on a debt-fuelled model of growth that failed.

All countries have to steer a course between two central risks.

A Britain carried aloft by the march of the makers.

There was a well-made phrase reversal in:

He made a good dig at previous Chancellors of the Exchequer; speakers who would rattle off the financial forecasts hoping that no-one would keep up. It was a good point. If the figures you use in a speech are meaningless then you might as well not use them:

It has been known for Chancellors in recent years to rattle these off at great speed in the hope that no one will keep up.
I will not do that.

He then proceeded to map out the necessary financial data with ease:

It was understandable. Borrowing will fall.

It’s incumbent on any speaker to make a good case, set out his or her evidence and draw a conclusion. And a budget speech is really no different. But there was one sentence that seemed contrived:

So we will change the regime to narrow the differential between these lower cost brands and the rest, and between cigarettes and hand-rolled tobacco.
This will reduce smoking and improve our nation’s health.

Right! This was a political line aimed at the Chancellor’s critics in the British Medical Association. Critics who want to ban everything that’s dangerous but want public financing for their industry. Right!

His conclusion reconfirmed his earlier points rather succinctly after 55 minutes or so.

So this is our plan for growth.
We want the words:

To drive our nation forward.
A Britain carried aloft by the march of the makers.
That is how we will create jobs and support families.
We have put fuel into the tank of the British economy

Using repetition and his characteristic listing style he also managed more than a hint of metaphorical allusion with fuel, tank and drive. A confident speech from the Chancellor.

You can discover plenty of public speaking tips with our regular series of posts, podcasts and training videos. And, when you want to boost your public speaking skills even further, please don’t hesitate to get in touch. Because a well-timed course or coaching session could be just the tonic you need for public speaking success.

Previous Post To Speak, Or Not To Speak, That Is The Question Next Post Housing Presentation Has Audience On Their Feet