So, what exactly is the cost of a speech or two. Typically you might consider your time and effort costs. Or your investment in practice and rehearsal. But for Julian Assange this evening the cost of a few of his balcony speeches equates to six months gaol time. 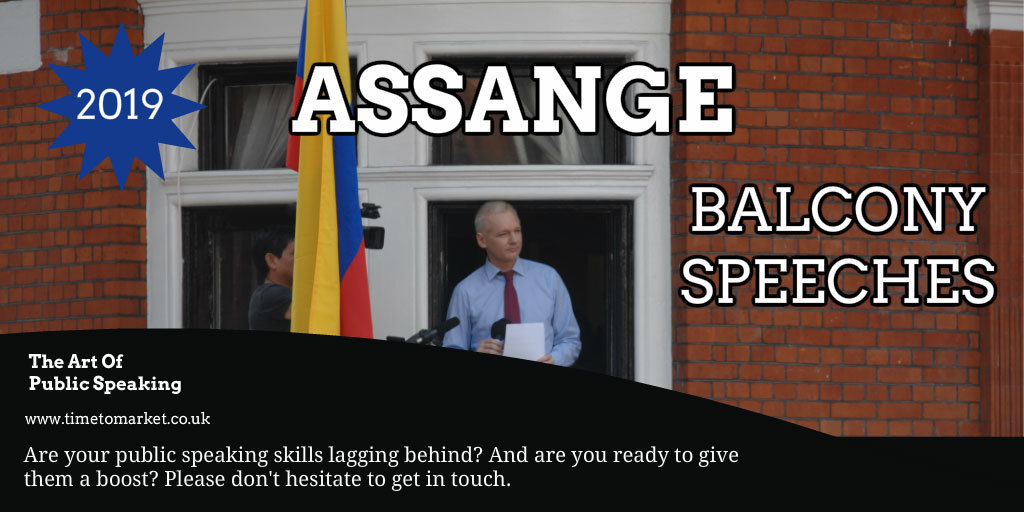 Balcony Speeches Add Up To Prison Time For Julian Assange

That's all because he jumped bail in the first place and fled to the Ecuadorian Embassy sanctuary for the best part of seven years. But when he faced the Judge today for the offence of jumping bail, he really got a nasty surprise. Because he might well have thought the Judge would give him a six month custodial sentence for his offence.

Balcony Speeches Double The Nature Of The Crime

But, it was not to be. Since the Judge outlined that the Julian Assange balcony speeches added to the offence. Yes, a couple of speeches that he gave from the Ecuadorian Embassy added to the crime. So, the Judge gave him a 50 week prison sentence. The best part of a year. That's just two weeks short of the maximum sentence for this type of crime. So the Julian Assange speech dedicated to whistleblowers and his Christmas 2012 balcony speech all counted against him.

A bit unfair? Well, Mr Assange's legal advisors clearly reckon so and we can expect an appeal. But the message is clear. If you intend to jump bail in the United Kingdom, then do it quietly and keep undercover. And don't, whatever happens, give any balcony speeches. Since they double your sentence.

Because the evidence is clear. A recent bail jumper was back in court only weeks ago. And his sentence for bail jumping was six months imprisonment added to his earlier sentence for manslaughter. But, whilst there's no doubt he sought to evade justice, he did so very quietly. He didn't embarrass the Judges or the legal establishment. And, of course, he didn't embarrass the British Government. Do that, and you can expect an extra six months inside.

So that's the salutary lesson for Wikileaks' Julian Assange. Next time, you are in this mess in the United Kingdom, then skip the balcony speeches if you insist on skipping bail.

You can always discover plenty of public speaking tips with our regular series of tips and hints for speakers. And, when the time is right for you to boost your own public speaking skills, then please don't hesitate to get in touch.