You can well imagine our surprise last week when we learned about a new approach to clapping by the Oxford University Students Union. Because for a day or two it certainly appeared that the Student Union had banned clapping or cheering at their events on campus. No clapping or cheering at student debates, meetings or other functions. And clearly this would have implications for audience feedback. Of course, behind all the froth was a more nuanced story. Since it seems that the Union simply passed a motion to encourage students to stop clapping. 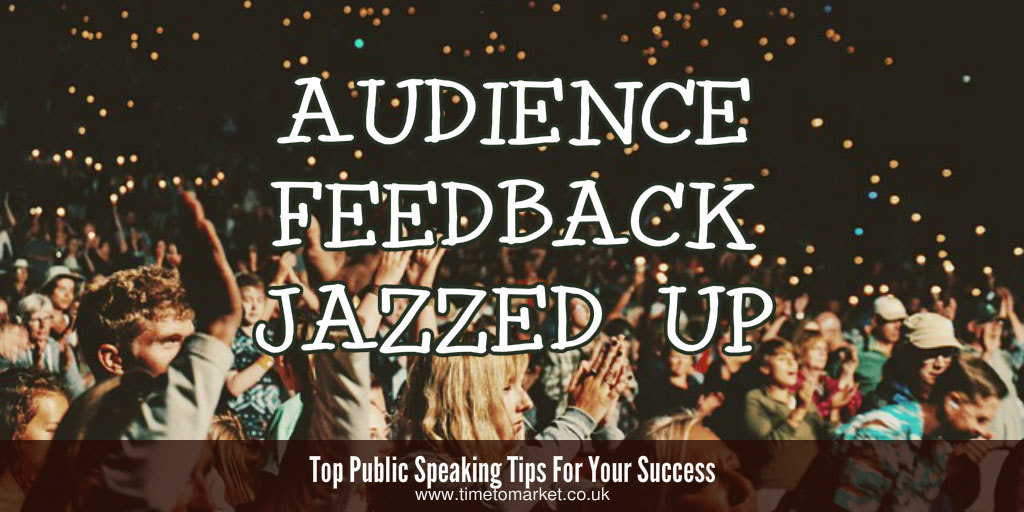 Audience Feedback At Oxford University Is To Be Jazzed Up

And is it really that important anyway? Well, let's put aside the sensitivities of some students to loud noises or percussive clapping for a moment. Because your task as a public speaker is made a lot easier with audience feedback. Since when your audience sits there expressionless and without any real feedback to you, the speaker, then you might well be on borrowed time.

How You Can Ensure Audience Feedback

You can aim to ensure audience feedback when you give a speech with these three simple techniques.

Borrowed time? Yes, because you have to engage an audience during your presentation or speech. That really is your job. And you get feedback on your progress when you watch and listen to your audience. So the sound of clapping and the physical act of clapping signals how you are getting it right. And without it? Well, perhaps it's not working for you.

The October 2019 Oxford motion was posed by Roisin McCallion, Vice President for Welfare and Equal Opportunity and Ebie Edwards Cole, the Chair for Oxford Students Union Disabilities Campaign. In an explanation, Roisin noted…

The policy was proposed in order to encourage the use of British Sign Language clapping during our democratic events to make those events more accessible and inclusive for all, including people who suffer from anxiety.

Inclusivity is one of the Students’ Union’s founding principles.

And the alternative to clapping? It's jazz hands, apparently. You wave your hands in the air or stand up and wave your hands in the air. Now how that works out for someone with a visual impairment I really don't know. Because I'd imagine that the sound of clapping would be an ideal signal to such an individual as much as the speaker or presenter. However, this same approach is already on display at the London School of Economics and Manchester University.

But, just consider how the Chancellor of the Exchequer felt when a key bit of his Tory Party conference speech went without a burst of clapping. That was audience feedback. And it was feedback that he'd want to reflect on. Priceless.

So, there we have it. The Oxford student union has voted to encourage the use of British Sign Language for audience applause so that students can fully participate. However, clapping and cheering have not been banned. And that's good to know. Because audience feedback is essential for both speakers and audience.

You can always discover plenty of public speaking tips with our regular series of hints, suggestions, podcasts and videos. And, when you are ready to jazz up your very own public speaking skills, then please don't hesitate to get in touch. Because a well-timed course or coaching session will always do the trick.