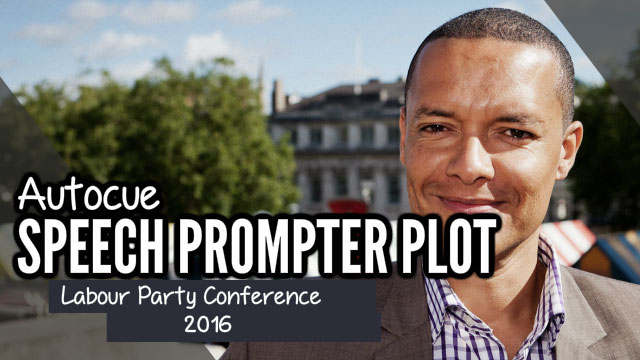 The autocue speech prompter plot has two main characters. At the speaker's lectern we saw Clive Lewis, Norwich MP and shadow defence spokesman for his party. And lurking in the shadows was Seumas Milne, spin doctor.

He's a divisive character at best is Jeremy Corbyn's chief spin doctor. So this event probably proves the point.

The gist of the story involves Mr Lewis giving his speech on the main conference podium. And it further involves an audience surprised at the lack of Trident content in the defence speech. And finally, in conclusion, it involves a furious Clive Lewis punching the wall backstage in frustration.

The cause of his frustration? Remarkably, it seems that his speech had been modified by parties unknown. Modified between its submission to the autocue speech prompter department and his actually reading it. Bizarre.

And the culprit? Seumas Milne. His master's voice, no less.

You might have expected Labour's glorious leader, abetted by Seumas Milne, to have vetted all the main conference speeches given by his shadow cabinet. That's certainly how the Tories work. But not on this occasion. Perhaps the leadership election upset their schedule. Or, perhaps they were too disorganised.

Whatever the matter, it seems that the Executive Director for Strategy and Communications either hadn't vetted Mr Lewis' speech properly or he had a change of heart about its content.

And the conclusion? Mr Lewis read his autocued speech unaware of changes or alterations until he came to them. A very frustrated Mr Lewis.

It's certainly one way to get the party message out. But it's probably not the best way to keep your troops loyal. Even shadow defence spokesmen can be demoralised.