Watching Boris Johnson in action just reminds me that rules are there to be broken. Public speaking rules that is. The former London mayor manages to dispense with all of the sage advice given to many aspiring orators. That's certainly the case with this Boris EU speech. 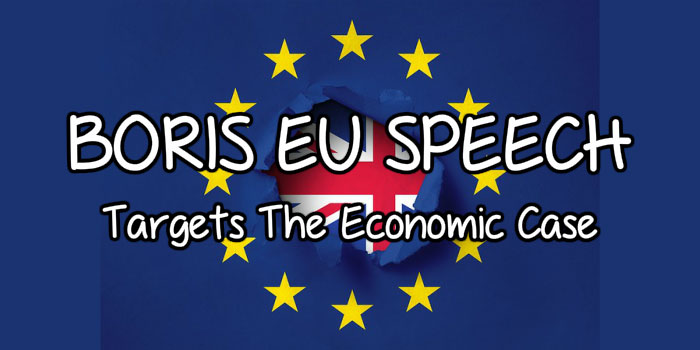 His appearance is typically dishevelled. He appears to be making it up as he goes along. He umms and errs and generally appears to be out of control.

And there's his appeal of course. Because we all know that he's firmly in control of this particular act. This is theatre. This is performance art. And because he's one of the very few politicians capable or daring enough to do this, he's likely to be successful.

This latest speech saw Boris at the London HQ of Vote Leave at another "Vote Leave" event where he naturally has the star billing.

But this speech was different to the Boris we expect. Practically statesmanlike. Coherent. Well-worded. Well-structured and perfectly delivered.

And that goes to prove that the former mayor is a public speaker in full control of his faculties. You just have to watch and listen for what he is going to say or do next. And that's a rare skill.

Yes, we were treated to one or more "Boris" moments. He just can't help it.

The second argument we might broadly call the peace-in-Europe argument – that the EU is associated with 70 years of stability, and we need to stay in to prevent German tanks crossing the French border.

We were told that goods would start pinging around the EEC as if in some supercharged cyclotron;

Why? Because negotiating on behalf of the EU is like trying to ride a vast pantomime horse, with 28 people blindly pulling in different directions. For decades deals with America have been blocked by the French film industry, and the current TTIP negotiations are stalled at least partly because Greek feta cheese manufacturers object to the concept of American feta. They may be right, aesthetically, but it should not be delaying us in this country.

The pace of this campaign is getting more frenetic. Of course the vote might still be beyond a call, but we can be sure of further excitements in the weeks to come.