We can now reveal all. Grand Old Party presidential candidate, Herman Cain, has revealed one of the secrets of his speech writing. It’s a song sung by Donna Summer in Pokemon: The Movie 2000. We might have expected him to make some more revealing disclosures about his private life. But thankfully, despite all the accusation in the media, he is keeping quiet about them all. Except for the Pokemon speech, that is. 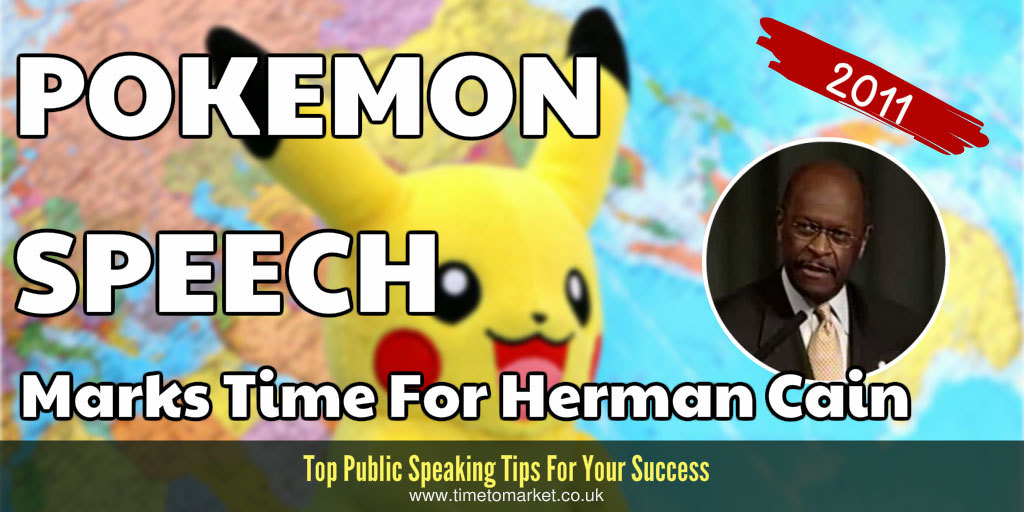 So the revelation about one of his speeches was revealing about the man. Not least since he announced his withdrawal from the Presidential nomination race today. That, perhaps, wasn’t too much of a surprise. Particularly after the Milwaukee Journal Sentinel story that the pause suggests Cain isn’t able.

Some keen-eared listeners had spotted a particular lyric in one of his speeches three months ago. That lyric came from Pokemon: The Movie 2000. Not the source you might expect from a potential Presidential candidate, but hey, that’s Herman. Now forever known for his Pokemon speech.

Since he’s now withdrawn from the race for the Presidential nomination his choice of speech writing sources is now only a historical record.

But, with the widespread derision that it’s inspired in the USA you’d expect future candidates will be more selective about their speech sources. I mean, who wants the legacy of giving the Pokemon speech?

It’s tricky that you have to pick a speech source that’s likely to be well-known enough to carry some resonance. But it also has to appeal to the inherent elitism of the political commentator. In this instance the elitist commentators appear to have the upper hand. For now.

But the Pokemon line, despite its source, remains pretty good for 2011:

Life can be a challenge, life can seem impossible, but it’s never easy when there’s so much on the line.

When you need public speaking tips, help and assistance, you can always turn to our series of public speaking tips. Because with more than 100 tips, there’s bound to be something that’s just right for you. And, when you need some further help or expertise, don’t forget that a public speaking coaching session will always do wonders. Maybe not a Herman Cain Pokemon speech wonder, but wonders nonetheless. So, when the time is right, please don’t hesitate to get in touch.