Eye contact. That’s the story that’s coming out of 10 Downing Street. Apparently the Prime Minister, David Cameron, wants to boost his audience eye contact when he gives a speech. 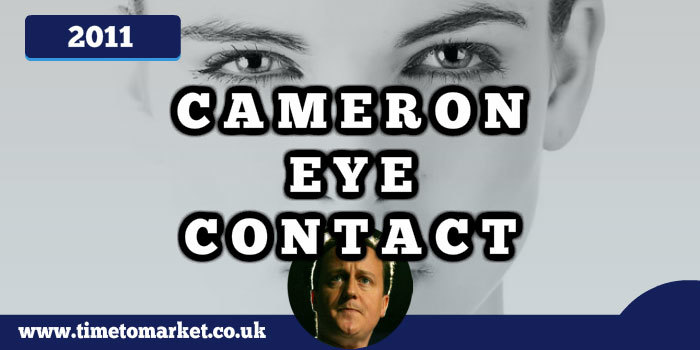 He’s an advocate of the type-written script as a presenter. He uses a prepared text which he reads at the lectern. And he’s rather good at both reading his script, looking at the audience and then speaking his lines. The net result is good. Undeniably good.

But he’s had experience of less good speeches. And his Liberal Democrat colleague, the Deputy Prime Minister, Nick Clegg has certainly had more than the occasional public speaking problem, not least with this civil liberties speech.

The answer is the autocue or teleprompter. It’s the public speaking tool of choice for President Obama, and for Presidents before him…dating back to Ronald Reagan who used the teleprompter in his speech to the Houses of Parliament in 1982. And, of course he achieved excellent eye contact on that occasion.

So, will he adopt the technology solution to boost his public speaking skills? Undoubtedly he will. Because he’s advised that eye contact is everything.

The fact is that he’s incredibly busy and the time he has to become fully familiar with a script is decreasing all the time. An autocue or teleprompter would allow him to give the impression of coherence and credibility and allow him to look deeper and longer at his audience.

But there are dangers. Not all autocue presenters or public speakers make the technology work for them. Mr Cameron will still need to practise delivering his speeches. Since you really do need autocue practice as Michael Bay, the Transformers Director discovered. Also, his use of autocue could make him look wooden and remote when he speaks. Plenty of eye contact but a wooden tone. That’s a public speaking problem that this Alan Mulally presentation demonstrated. And, of course other autocue advocates have had to deal with similar issues. So, autocue could save him some time. But it’s not a panacea for public speaking excellence.

You can also aim to discover top public speaking tips with our regular series of posts, podcasts and tips videos. And, when you are really primed to boost your own public speaking skills, then why not consider taking on some coaching or organise your own training course. And, of course, you’ll find that eye contact is a critical skill. So, please don’t hesitate to get in touch when the time is right.