After some four years of conspicuous absence from the speaking podium, Fidel Castro gave a speech last Saturday. It’s been four years since his mystery intestinal illness forced Cuba’s leader to give up power to his younger brother Raul. So this Fidel Castro speech was a surprise to the assembled lawmakers in Cuba’s Parliament in Havana. 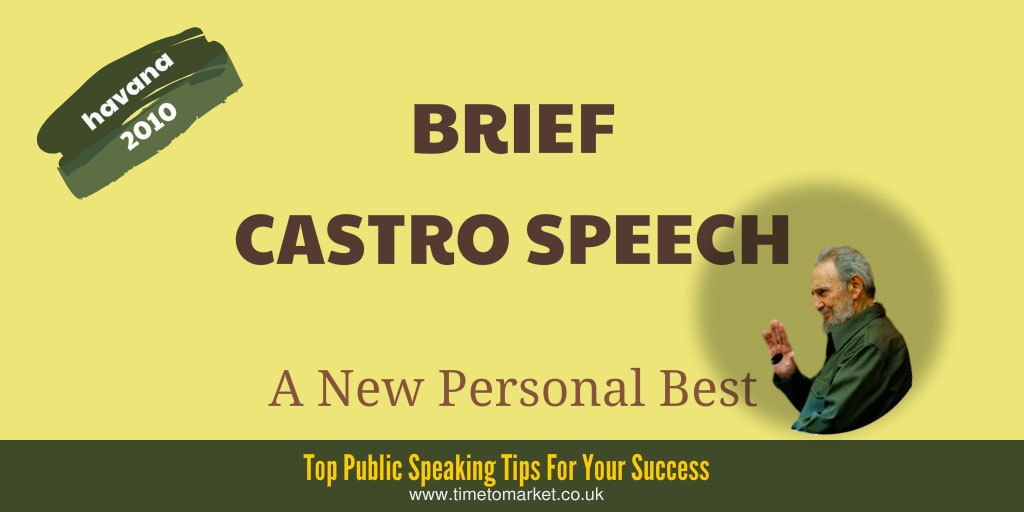 Castro’s speech was something of a personal best. At less than 11 minutes the speech is undoubtedly his shortest in his 49 years of power in Cuba. Perhaps he really is following his own words:

“I have reached the conclusion, a bit late perhaps, that speeches should be short.”

Perhaps he no longer has the endurance required for speeches lasting several hours. Those speeches certainly stretched the endurance and stamina of his audiences. So it’s the likes of Hugo Chavez who now has the dubious reputation for long speeches. Or, of course, President Putin who really does need no tuition in how to give a lengthy speech.

Notably his audience in the parliament building included his brother Raul, the new Leader. Could it be that the short Castro speech was another sign of the shift of power? Either way, brief speeches are typically best.

You can discover plenty of public speaking tips with our series of top tips for speakers and presenters. And, with more than 100 tips from which to choose, there’s something for every occasion. Perhaps you want to know how long should your speech be? That’s not a problem. Plus, when you want to give your public speaking skills a real boost, then you can always consider some training. Because a well-timed training session will always give you the skills and confidence that you need. So, when the time is right, please don’t hesitate to get in touch.