Speeches by the Deputy Prime Minister Nick Clegg are typically worthy if not newsworthy. We are used to it now, so the Clegg CBI speech at the CBI President’s Dinner this week was no exception. A worthy if non-newsworthy speech. 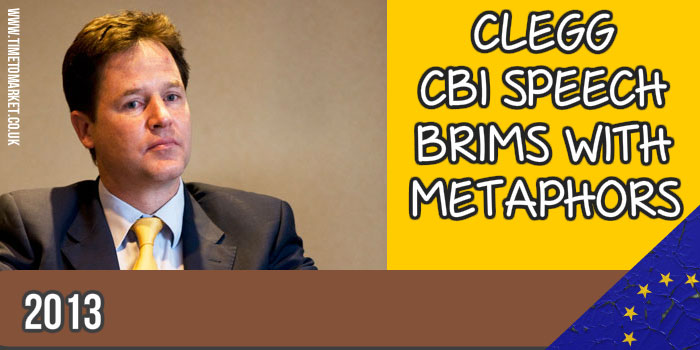 Speaking at the Confederation of British Industry (the CBI) could well be a full-time occupation for an aspiring politician. But we are not so rude to suggest that for Mr Clegg. But there do seem to be a lot of dinners and functions organised up and down the country by Britain’s leading business lobbying group. Is it a concern about the EU? Or is it just oiling the wheels?

Because it was in May we spotted the Chancellor at the CBI annual dinner. And then, this week we heard Mr Clegg at the CBI President’s Dinner in London.

In his speech the Leader of the Liberal Democrats was at his customary loquacious best. His metaphors worked and he wasn’t afraid to roll them out:

It hasn’t been easy. Our road to recovery has been bumpy…I believe, we’re turning a page on the mess we inherited.

That myth of prosperity – a house of cards built on excess government debt, excess private debt and an unbalanced economy, with private debt reaching 450% of GDP at the height of the financial crisis – meant that when the crash came, Britain fell harder and deeper than it should. It left good businesses, across sectors, denied the oxygen of credit.

Of course there are some people who believe that in government you can pull a single lever or push a magic button and immediately everything will be fixed. While others argue that if government would only remove itself entirely from the economy a thousand flowers of recovery would bloom.

As an old-fashioned Liberal, I believe it’s about getting the balance right between a government that gets out of the way of businesses to enable them to do what they do best – create jobs and drive growth – and a government that steps in, when needed, to set the rules of the game essential to ensure a sustainable and competitive economy and to support business through access to modern infrastructure and a skilled workforce.

But, oh dear. Because this position taker in his speech just didn’t work. It was too long. Brevity is best when you want to make this work.

A Clegg CBI Speech With Structure

His speech had clear structure and he signalled that as he spoke. So, we heard

But, if we found a problem with this Clegg CBI speech, it was his reliance on phrases that have become political class clichés.

For me that’s partnership: government working with business

This local revolution to create jobs and drive growth is at the heart of the vision Lord Heseltine set out and which this government is taking forward.

One final thought about political opportunism. We noted how the Leader of the Opposition had seized the One nation idea from the Tories. It does appear that the Deputy Prime Minister is seizing the idea of No Turning Back from the Tories as well. If this keeps going we can look forward to Conservative speeches devoid of ideology; plundered by other speakers from the other main parties.

When you are ready to give a speech, don’t forget that you can always prepare with some help from Time to Market. A half-day public speaking skills refresher gives you the ideal chance to perfect your speech  in good time. You never know we might even have the chance to work on some metaphors. If it’s good for Clegg…