The “Yes” campaign has kicked off for the AV (Alternative Vote) voting system referendum planned in three months with a Nick Clegg speech in Leeds. 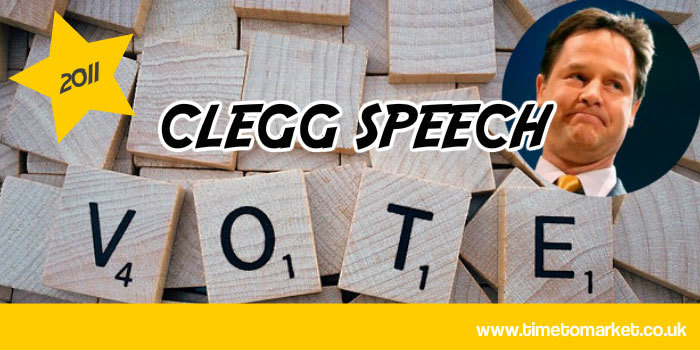 Nick is turning into a very slow and deliberate speaker. Not least, because he’s not prone to enthusiastic outbursts or flights of fancy. But he was on time, and not late for this speech.

So, his speech in the Carriageworks theatre in Millennium Square was measured and deliberate. Thus, it aimed to make sense of the AV campaign. We noted that his speaking approach is not dissimilar to the Prime Minister’s right now. Thus, he appears to like short sentences:

This is a listing approach. And he likes doing it.

So, this Nick Clegg speech echoes with repetition. Sometimes his phrases follow in consecutive sentences and on occasions they feature at irregular intervals:

No wonder people have given up caring.

No wonder confidence in politics is so low.

No wonder people are so ready to believe the worst about their politicians.

We deserve something different.

We deserve something better.

We deserve a new way of doing things.

If Nick Clegg suspects that there are better electoral systems to the Alternative Vote (AV) then it doesn’t show. That might be because his central argument throughout the speech was that politics isn’t working. First, he noted how the combination of the Parliamentary expenses scandal of 2009, cash for honours and Ministers for hire all contributed to the population’s rejection of politics. With repetition and rhetorical questions, his speech then took on the second task of explaining how and why the AV voting system will resolve this rejection.

Do you remember how it felt when you heard about MPs spending your money on duck houses and having their moat cleaned?

Do you live somewhere where the same party wins every time and you feel powerless?

Do you ever look at politicians and parties and think these people don’t care about me?

This was a campaigning speech that seemed to work for the Deputy Prime Minister. His central argument, that politics isn’t working, was well-worked throughout. The point followed that AV would fix the problem. Thus, it was well-made and the argument was reinforced with some good examples and illustrations.

Was it a believable speech? Yes, of course, up to a point. But then your mind wanders to other broken promises and commitments.

The Deputy Prime Minister has three months to campaign.

You can read a whole series of tips for public speakers from Time to Market. And, when you are ready to give your public speaking skills a real boost, please don’t hesitate to get in touch.