If there was a man who might aim to avoid a Christmas party speech right now, you might be forgiven for guessing Jeremy Corbyn. But despite the Labour party leader being right in the thick of it at the moment, he's clearly still got his sense of charm and presence. 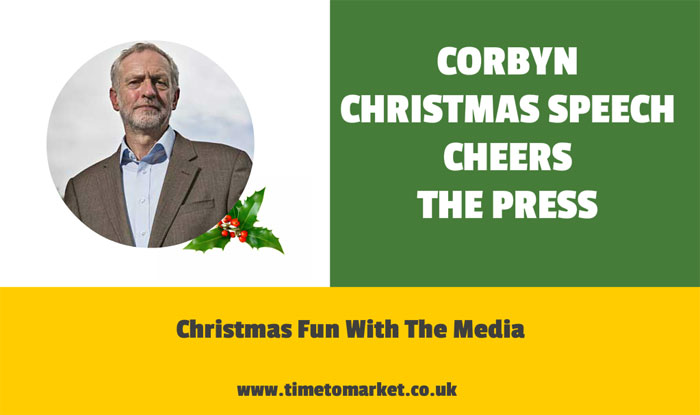 The New Statesman reports how last night, 16th December, he hosted his first Leader's Drinks for the Press. Now that sounds like a good excuse for some fun. And fun it seems to have been.

The Labour leader, accompanied by John McDonnell and Tom Watson for this festive gathering, was on fine festive form. Jokes and witticisms came from everyone. Self-deprecation in a Christmas party speech can go a long way with the Press when you are buying the drinks.

This gathering is unexpected and unusual, and on one level yours and my worst nightmare

There's a number of things I've been told not to say: not to mention Karl Marx, Mao Tse-tung or Enver Hoxha, so I haven't.

For all the coverage I’ve been given in the papers over the last few months — I’ve kept you going.

Both John McDonnell and Labour's Deputy Leader Tom Watson also said a few word in equally jovial fashion. On such an occasion it always helps to work as a team!

For all the fun and high spirits, Jeremy Corbyn still had work to do. Needing to get ready for his European trip today he left in good time, but made sure that everyone had glasses filled with wine before he left, noting…

We only do red.

As office party speeches go, this might not have been your typical speaking opportunity. But it's all part of the charm offensive that Jeremy will need to lead an opposition against the Conservative government.

You can find more top tips for your own office party speeches when you join a public speaking skills course with Time to Market. You can choose on-site or off-site training for yourself and your team. All you need to do is get in touch.