New Yorker Cyndi Lauper is no stranger to Broadway with a theatre credit that includes a stage performance in the 2006 production of The Threepenny Opera. But composing the score for the Broadway success Kinky Boots has catapulted Cyndi to her first Tony Award. Her score for Kinky Boots won the award in the category of best original score written for the theatre. So the Cyndi Lauper speech that followed was especially poignant. 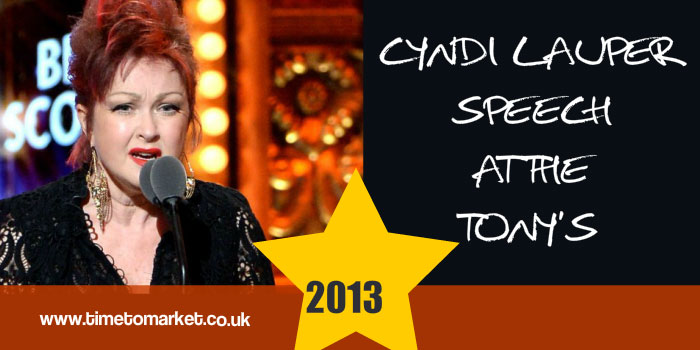 Cyndi Lauper Speech At The Tony’s

Her acceptance speech was breathless. That betrayed her surprise at the award. She kept things brief, immediately noting:

But she had clearly practised her speech that she delivered without notes or a script. Because it’s always a good plan for you to snatch some speech practice.

I can’t say I wasn’t practising in front of the shower curtain for a couple of days for this speech.

Her speech took a familiar line with a heartfelt thank you to her mother for inspiring her to sing. This was fun and evocative for many in the audience with similar experiences.

She also thanked other family members in her creditably short speech. But, brevity aside she managed to roll off a whole list of cast members, producers and directors. In fact her speech paid tribute to just about everyone connected to Kinky Boots., Yes, at least one of the names appeared to be character names rather than cast names. But, hey, go with the flow!

Her speech appeared to take a theme of inspiration with:

Your hard work inspires me

You guys inspire me…

You can’t deny that Cyndi Lauper has written a cracking score for Kinky Boots. But this little Cyndi Lauper speech, breathless and brief, also showed both originality and style. Plus, not a little inspiration. We’ve cobvered some good acceptance speeches in the past, such as the Sandra Bullock speech. But this speech from Cyndi Lauper hits all the right notes.

When you need inspiration for your next speech you can always turn to us for a coaching session. We can offer a coaching service at more than 40 training centres in the UK. Plus we can always offer the same service at your offices. So, you are never that far from your nearest public speaking session. Please don’t hesitate to call us for more details.