There’s no denying that Ed Davey has had a shambolic week. But it’s a shambles not of his making. As Secretary of State for Energy he had to give a statement in the House of Commons today. Not least because he had to explain away earlier comments made by the Prime Minister. Tricky. But, beyond his verbal dexterity in the House, his energy speech to a Confederation of British Industry audience today also made the news. 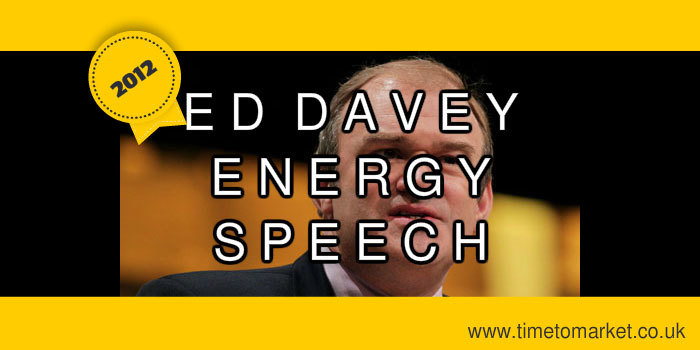 The subject matter for his energy speech should be interesting, inspiring and invigorating. Because it’s topical right now. Everyone’s talking about energy price rises.

Yet the Secretary of State’s speech managed to appear dull right from the start:

The CBI has been on a journey, much like Government policy, as both have grappled with how to decarbonise the economy and tackle climate change while ensuring the UK remains competitive and energy affordable.

Would it really be possible to throw any more into this sentence?

His speech certainly had weighty matters to consider. Because it noted how the need for energy infrastructure costs between now and 2020 would represent 50% of all UK infrastructure costs over the period. When the other half is made up of ports, road, rail, Crossrail and airports you get a sense of the huge weight of investment needed to keep the lights on.

But weighty matters aside this speech sapped energy from his audience.

The speech brimmed with jargon. So, we heard about:

And it was awash with a near impenetrable management speak:

Prices will be set administratively, aiming to bring all technology groups down in cost and begin levelling the playing field.

Right. Because this was passive and indirect speech of the worst kind.

Then there was sloppy speech:

But when every initiative and proposal is phrased in the same fashion then the meaning is lost. Is this about the timing of a new nuclear plant at Hinkley or the likelihood of it happening at all? There’s a difference, and the audience is not sure.

This was tiresome stuff from the Minister.

His speech failed to reach a solid conclusion when he finished with a recital of the six tests set by the CBI for evaluating electricity market reform. Had he begun with these tests and referenced them throughout his speech this might have proved worthwhile. He didn’t and it wasn’t.

You can discover plenty of public speaking tips with our regular series of posts, podcasts and videos all dedicated to improving your public speaking skills. And, when you are ready to take further strides with your own public speaking energy levels, you can always join one of our training sessions. So, please don’t hesitate to get in touch when the time is right.