The Deputy Leader of the Liberal Democrats was in action today with a speech in Leeds. And they chose the Brewery Wharf for this Ed Davey economy speech. Now, it's fair to say that the Brewery Wharf area of Leeds is distinctly attractive as a venue for any speech. Yet the meeting room for this particular Ed Davey speech was tiny with its journalist and activist audience all squeezed in. Certainly not the best venue for a keynote speech. 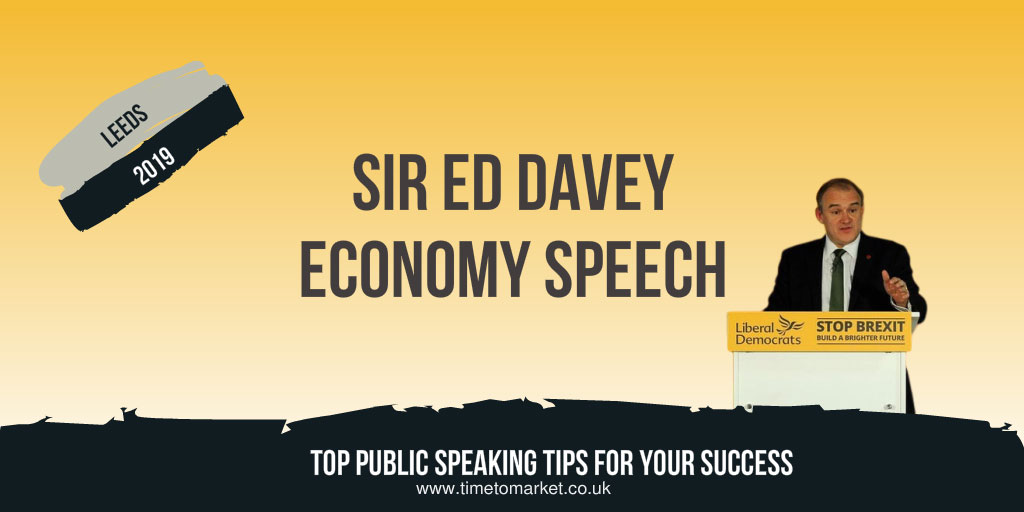 A Sir Ed Davey Economy Speech Adds Up To Six

If you expected a classic beginning to this speech, then you might be disappointed with this Ed Davey economy speech. But you shouldn't be. Because you really do need to open your speech with style. And Sir Ed did that. He went straight on to the attack, since this was really a campaign speech.

For too long, Britain has not had the economy it deserves.

Under this Conservative Government, too many people can’t live a secure, happy and fulfilling life. Too many businesses face crippling uncertainty over their future. And too many of us feel vulnerable in the face of technological change.

His delivery was slow and measured and he made good use of pauses as he spoke for the best part of 30 minutes. He certainly knows why you want to use pauses in your speech.

Beyond the pausing, we also heard good use of tempo changes. Sometimes slow, and then sometimes a bit faster. It's always a good technique and it's something that really does work when you want to keep your audience engaged.

Sir Ed certainly made good use of a structure for this economy speech. He's got a 6-point plan. And that plan was evident as he made his way through his speech.

In rejecting Brexit, in wanting to build a brighter future, not return to a less than rosy past, Liberal Democrats have a detailed plan for a successful, sustainable economy.

The first part of our economy plan is clear and unequivocal: Stop Brexit.

Any economic plan that involves Brexit is a weaker plan than ours.

Having a structure works. What also works is to outline the 6 points to the plan before you dive into the first point. It always helps to keep up the attention levels during your speech.

Economy Of Words Is Much Improved

This Ed Davey economy speech was a distinct improvement upon the Ed Davey energy speech that we heard in 2012.  On that occasion his speech was distinctly dull, sloppily worded and it brimmed with jargon. This economy speech in Leeds was much, much better. A reason? Probably because it wasn't written by an Energy wonk in the Department for Climate Change.

Clearly he's avoiding sloppy terminology and jargon with this economy speech. But he's certainly adopted some of the non-sentences so favoured by his former boss, Nick Clegg.

Fantasies born of nostalgia for a British Imperial past. Competing with fantasies from a failed 1970s ideology.

He's not afraid of making political points. This is after all the cut and thrust of a campaign.

Snuck? Agh…apart from that, we did laugh.

The Economy Pays Off

This was a well-given Ed Davey economy speech. But could you improve anything? Well, you can always aim for improvement. Certainly we heard a few stumbles today. That's probably because Sir Ed Is busily rushing around the country and not spending any time on rehearsal. Not an issue. Because with a good script he's fine. On a last point, Sir Ed also has a tendency to "swallow" the end of some words. Typically the long words. That's not a big deal, and many people do it.