Now and again we come across cases involving a fear of public speaking, glossophobia. In these cases an individual might suffer extreme anxiety when having to speak in public. 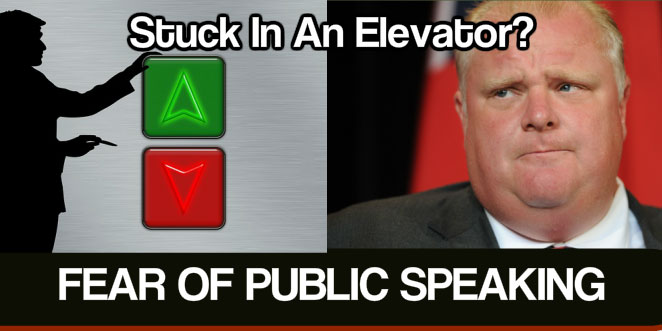 Toronto Mayor Stuck In An Elevator Or Afraid Of Public Speaking?

Caused by stress or embarrassment, it can be traumatic. Of that there’s no doubt.

Many would-be speakers with a fear of public speaking go to extraordinary lengths to avoid speaking in public.

Avoiding all hints of a speech is one strategy. Failing to show up to the event is another. For someone with a fear of public speaking these are serious matters. But would you hide in the lift to escape from public speaking?

Maybe not, since an equally serious condition is a fear of getting into a lift (elevator). There’s many a person who will walk the stairs out of a fear of riding in the elevator. It might be a case of claustrophobia or agoraphobia. So, you either have a fear of enclosed spaces or a fear of being trapped in a location with no real chance of escape.

Come to think of it, that’s beginning to sound like some people’s view of public speaking!

So when we heard that Toronto’s Mayor, Rob Ford, had somehow managed to get stuck in a lift (elevator) before his speech we were intrigued. Particularly when his time in the lift (elevator) became quite lengthy.

It seems that the Mayor, who has something of a reputation already, was due to speak at an Economic Club of Canada function in the City’s Hilton Hotel. His audience, some 200 strong, were gathered ready for the 1200 lunchtime scheduled start. Now, we have spotted other speakers being late for their speeches. A Baroness Scotland speech was famously late.

They waited…and they waited. At 1300 lunch was served without the Mayor yet making an appearance let alone giving his speech. Unfortunately for the Mayor part of his reputation is for tardiness. So people began to drift off back to work. They might have paid $90 for the privilege of hearing the Mayor…but work has to go on.

Stuck In An Elevator

And then he appeared in the company of the Economic Club President, Rhiannon Traill. They got stuck in the elevator as they rode the lift down to the conference floor. And, of course, they were stuck for all of 45 minutes or so before being rescued.

Now, it’s unfortunate that some people have been doing the maths here and calculating how long the Mayor was stuck in the lift and how long he was genuinely late. There was a disconnect somewhere. That’s his reputation for tardiness again.

Others have been left wondering whether the Mayor actually had a fear of public speaking on this occasion. Things have definitely been brewing in Toronto for the Mayor. It’s fair to say his reputation isn’t moving in the right direction. Could this have led to his general tardiness?

Did this fear lead to his elevator entrapment? Who knows. But I for one wouldn’t swap elevator entrapment for the podium. You can understand that public speaking is a breeze compared to being stuck in the lift. Now that begs the question, If you were stuck in a lift, “who would you want to be stuck with…Mayor Ford”? Thought not.