To be the new Prime Minister is one thing. But, to be the Prime Minister of the world’s largest democracy is quite another. Newly installed as Prime Minister in Delhi today, Narendra Modi has wasted no time in getting to grip with India’s sclerotic government. With a method he employed as Chief Minister of Gujarat State, he’s called for PowerPoint presentations. Government by PowerPoint. 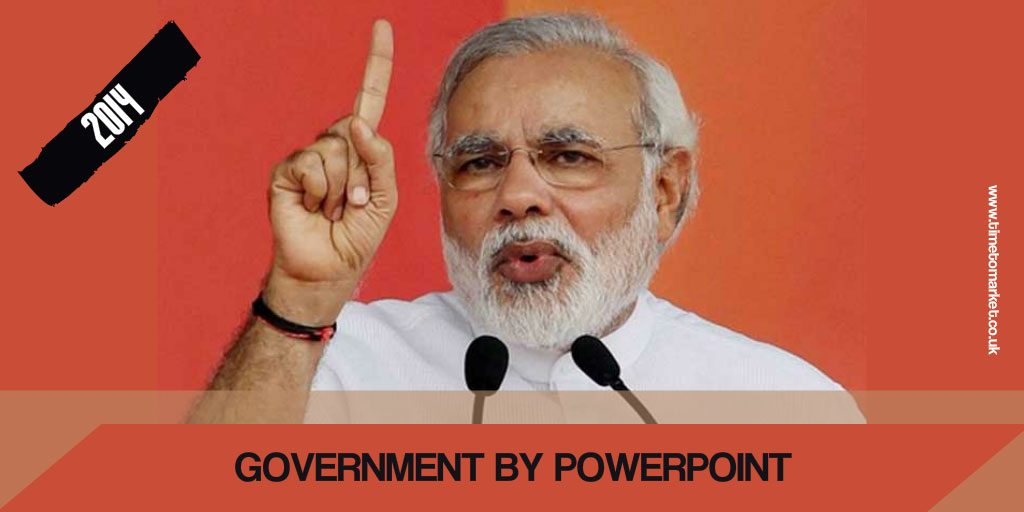 Government By PowerPoint The Modi Way

More precisely he’s asked his Cabinet Secretary, India’s most powerful civil servant, to secure PowerPoint presentations from the chief secretary (Babu) at each one of the most important ministries. This government by PowerPoint executive order worked in Gujarat where the Prime Minister served as Chief Minister. We wonder whether he learned this approach from others. Certainly many in the public eye use the method: for example, there are these spymaster PowerPoint skills to consider.

And what’s more, each Ministry’s PowerPoint presentation is intended to summarise:

That all sounds pretty clear and concise. So, keeping these PowerPoint presentations short and to the point will be key to their success. Because too much detail is probably going to be the primary sin.

No doubt the Prime Minister won’t tolerate too much padding. But is there help if any of the Babus don’t really get the task? Oh yes. There’s no end of practical government by PowerPoint help in the Indian press. It’s serious stuff. It’s apparent that swathes of the population want their civil servants to get cracking with their task.

These PowerPoint tips and techniques might well prove useful to the incumbent Babus. There’s already more than a hint that their presentations might well secure their current position. Or accelerate their elevation to a new Ministry. Or…ensure their move to a backwater of Indian civil administration. So, with so much personal risk involved with these PowerPoint presentations we can expect some serious work in the next few days.

There’s a lot riding on these Government by PowerPoint presentations as Mr Modi tries to kick start the Indian economy. Ladies, gentlemen…to your slide decks.

You too can learn more about how to use PowerPoint in your next presentation when you join a PresentPerfectTM training course.