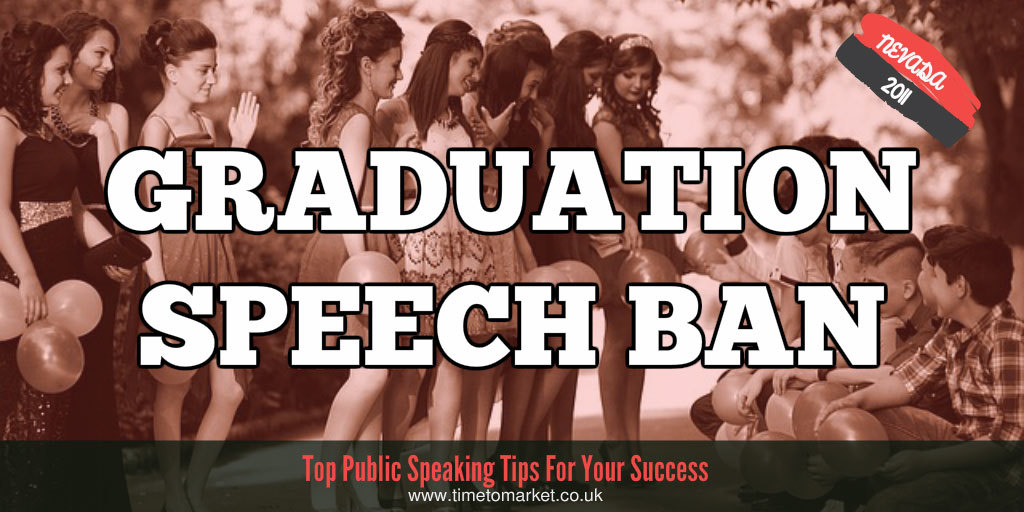 That’s right, “monotone.” Now, we used to think that your voice tone was pretty important when you gave a speech. In fact, we still do. Because it’s vital.

The school at the centre of the problem is the Cimarron Memorial High School. Their well-publicised mission is…”to provide a quality education which will enable students to become lifelong learners and responsible citizens and to acquire the skills essential for success in the 21st century.” Excellent.

And the problem itself? Well, apparently Andrew Booth of Cimarron Memorial High School created a speech that he planned to deliver with a bit of rhyme. Some might call that rap. But it was rhyme when the likes of Jesse Jackson used to do it.

The school officials have tediously imposed a graduation speech ban on Andrew. So, he can’t deliver the speech that he should make as the elected senior class president.

Their problem with the speech isn’t its content. Because there are no foul words or vulgarity. It’s the delivery format. Rhyme isn’t formal enough for the graduation ceremony. An excerpt suggests it’s not that bad:

Take a walk with me down memory lane.

We were first freshman, the bottom of the food chain,

There’s likely to be a stand-off with this speech. The unelected school officials will be in the unusual position of not permitting the elected senior class president to speak. Apparently they will switch off the microphone if he gets anywhere near the podium. Welcome to the real world.

Speech or no speech, this school is inadvertently teaching its students the hard realities of living with unelected, pompous officials. That’s a shame because a Mayor Goodman speech in Las Vegas is really no lesson plan in how to give a good speech. So it’s amazing what’s happening here. But this isn’t Syria or Libya. It’s the USA. And, every year a school graduation speech ban is a fact of life.

You can discover plenty of public speaking tips with our regular series of tips for speakers. We know that a Mayor Goodman speech in Las Vegas is probably already beyond any repair. But we hope that you can find some useful hints and tips. Plus, when you need to boost your public speaking confidence, please don’t hesitate to get in touch about training or coaching.