How Long Should Your Speech Be?

When you have to give a speech it’s a good idea to ask how long should your speech be. Roughly, or exactly, it’s something that you really should know. That’s not least because your audience probably has other things to do. You can’t afford to outstay your welcome. 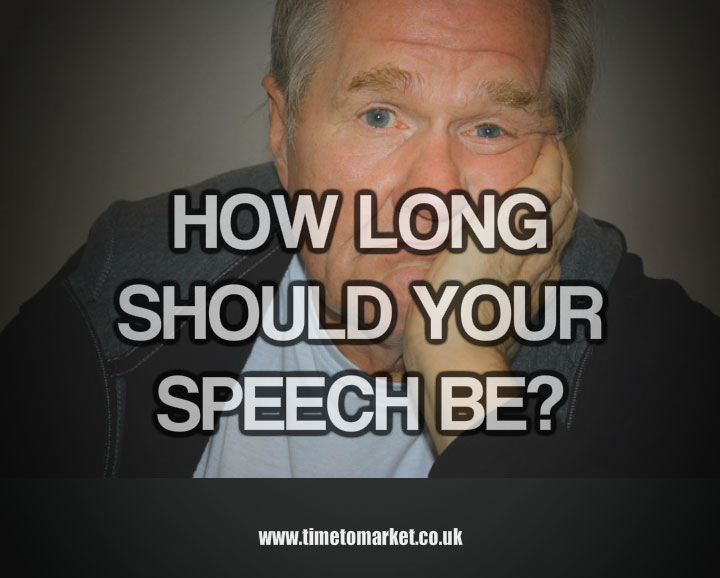 What’s The Ideal Length For Your Speech?

But we suspect that China’s President, Xi Jinping, won’t be used to asking the question, “how long should your speech be?” Well, perhaps when he was a junior leader in a China Communist party cadre. But not now that he’s the supreme leader.

How Long Should Your Speech Be Mr President?

We sense that his speech yesterday, in the Great Hall of the People in Beijing, proves that point. China’s President was addressing the 19th Party Congress where he was clocked speaking for three and a half hours in all. That really is an epic speech.

But in equal measure we also sense that his speech pointed at something else. Because for all the rhetoric and the use of metaphor in this speech, it proved a burden for his 3,000 strong audience.

Perhaps we should have guessed what was going to happen if we’d read the title to his speech.

Yes, of course, that’s quite a title. And quite a clue for what’s going to follow.

Certainly it was obvious from the audience members’ body language that it was hard work listening to this speech. Numerous politburo chiefs disappeared for short breaks. And 91 year old Jiang Zemin, the former general secretary of the party, was obvious in his yawns. Yes, the gerontocracy is still there.

Everyone in the party should develop a good grasp of the essence and rich implications of the Thought on Socialism with Chinese Characteristics for a New Era and fully and faithfully apply it in our our work,

A Tradition Of Long-Winded Speakers

Yes, your audience has a limit. And Xi Jinping found that limit today. But we do know that he can speak with some brevity. Because we heard the short Xi Jinping speech after he became Leader in 2012.

But, there is of course a long tradition of long-winded speakers. At the shorter end of the spectrum we have the former President of the European Commission, José Manuel Durão Barroso. His last lengthy EU speech took 75 minutes with 9,000 words. Comparatively short when set against Xi Jinping’s mark.

Robert Mugabe speeches are certainly shorter now than of old. But he still has a habit of making his audience yawn. He’s probably never asked, “how long should your speech be?”

Fidel Castro certainly had a reputation as one of the long-winded speakers. But, towards the end of his years in power, perhaps he’d seen the light.

I have reached the conclusion, a bit late perhaps, that speeches should be short.

We really don’t want to get involved in guessing what was the longest speech recorded in history. But, we can state with some certainty that the late Hugo Chavez of Venezuela could well be a contender for the title. A nine and a half hour long Chavez speech would be enough to finish off most audiences. How long should your speech be? Not nine and a half hours, please.

And have you spotted the link? Yes, there’s a distinct whiff of autocracy around the podium when it comes to public speaking long-windedness. So, we can be confident that when a lengthy speech is viewed as a signal of strength, power and virility, then long speeches just get longer.

When you need some great public speaking tips you are always free to browse our series of tips, podcasts and videos. And for more serious public speaking skills advice you can also join us for coaching or training. Join us, at one of our off-site training centres, or your own offices. It’s your choice.

So, please don’t hesitate to get in touch when the time is right.