JFK Speechwriter Signs Off At 82

Theodore Sorensen the eminent speechwriter for John F. Kennedy has died at the age of 82. With his death goes a living link with the Kennedy administration. As the JFK speechwriter, Sorensen served Kennedy for many years, beginning in 1953 when the young Kennedy was a Massachusetts senator. Soon after he was designated a “Special Counsel,” and he quickly became the President’s chief speechwriter in the White House. 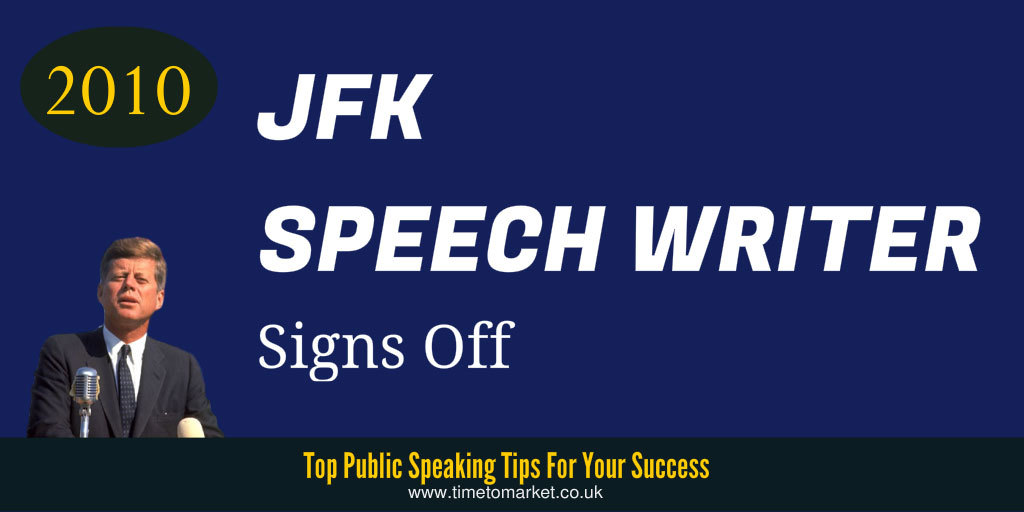 It was, of course, Sorensen who was credited with the President’s 1961 inaugural speech. Though, in his own estimation, it was his drafting of the President’s personal letter to Nikita Kruschev of Russia during the Cuban Missile Crisis of 1962 that was his finest moment. Sometimes, but not that often, good writing is overlooked.

The Life Of A JFK Speechwriter

In 2008 Sorensen was interviewed about his years of service as JFK speechwriter. He described his 11 years with John F. Kennedy as the most  interesting, challenging and useful years of his life. He added…he didn’t get much sleep. That’s the life of a President’s speechwriter. And, of course, we suspect that things haven’t changed that much for an eminent speech writer, such as the speechwriter Peggy Noonan. Still, then we come across an example of poor speech writing. One example, of course, is the Uganda speech writer writing for President Museveni.

You can discover more than 100 top public speaking tips just right to help you with your next speech or speech writing. And, with more than 100 top tips for speakers and presenters, there’s a top tip for every speech event. Plus, when you are ready to give your own public speaking skills that extra edge, you can always get in touch to discuss a training course or coaching session. So, when the time is right, please don’t hesitate to get in touch.