After the debacle of the Labour leader’s conference keynote speech in Manchester the Conservative leader simply had to keep on track his speech. Not miss out bits. Remember the economy. And, of course, remember the deficit. 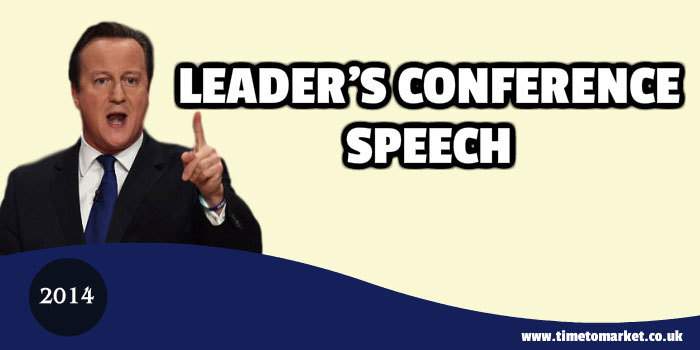 So, not surprisingly, speaking with autocue, he managed that with ease.

Keeping his pace slow and measured he worked his way through an extensive trawl of conservative policies, thoughts and ideas:

And by the way – you never pull one person up by pulling another one down.

Sentences were characteristically short. That’s the style for a modern leader’s conference speech.

They have known this isn’t any old country.

This is a special country.

David Cameron, like most politicians, is fond of a solid position taker in his speeches. This leader’s conference speech was no different.

So let other politicians stand on stages like this and promise an easy life. Not me. I am here today to set out our Conservative commitment for the next five years.

We also heard a whole string of yes, but statements more like Vicky Pollard’s script than that of the leader’s conference speech.

I am here today to set out our Conservative commitment for the next five years.

If you want to provide for yourself and your family, you’ll have the security of a job…

…but only if we stick to our long-term economic plan.

If you work hard, we will cut your taxes…

…but only if we keep on cutting the deficit, so we can afford to do that.

For those wanting to buy a home, yes – we will help you get on that housing ladder…

…but only if we take on the vested interests, and build more homes – however hard that is.

We will make sure your children get a great education; the best education…

…but only if we keep taking on everyone who gets in the way of high standards.

For those retiring, we will make sure you get a decent pension; and real rewards for a life of work…

…but only if we as a country accept we all have to work a bit longer and save a bit more.

Being a very modern sort of party leader this leader’s conference speech also included some language we’ve never heard before in a platform speech.

That will take 1 million more of the lowest paid workers out of income tax – and will give a tax cut to 30 million more.

So with us, if you work 30 hours a week on minimum wage, you will pay no income tax at all. Nothing. Zero. Zilch.

That proved a significant sound-bite for the TV news.

Because, with the focus on the deficit and the economy Mr Cameron couldn’t help but poke fun at his Labour party counterpart for his conference keynote speech.

And while I’m on the subject of the big economic questions our country faces – on spending, on tax – did you hear Ed Miliband last week?

He spoke for over an hour, but didn’t mention the deficit once. Not once.

He said he ‘forgot’ to mention it.

You can discover plenty of public speaking tips with our regular series of tips for speakers and presenters. And, with more than 100 top tips, podcasts and videos, you’ll find something for every occasion. Plus, when you want to develop your public speaking skills that bit further, then you can always consider some training. Because a public speaking course will always boost your skills and confidence. So, when the time is right, please don’t hesitate to get in touch.