In his new book Edmund Morris relates how a lengthy Roosevelt speech served Theodore (Teddy) Roosevelt well when he was attacked by a potential assassin in 1912. 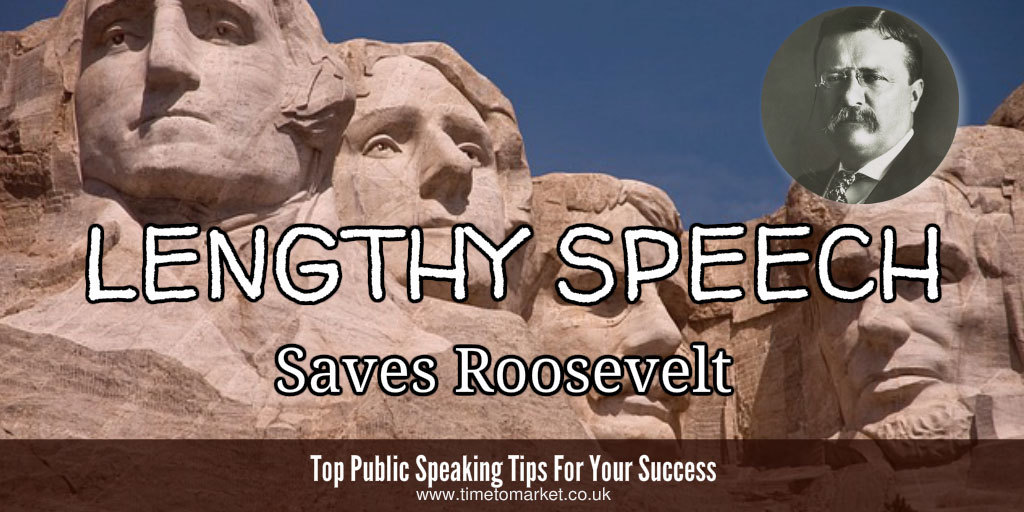 When the attacker fired his pistol the bullet was considerably slowed by the former President’s overcoat, suit jacket, a steel-reinforced spectacles case and the thick text of this rather lengthy Roosevely speech.

With blood oozing from his chest, where the bullet had stopped in his ribs, Roosevelt got going with his speech in Milwaukee, Wisconsin. Declaring that he was as strong as a “Bull Moose” he gave his speech for the next 90 minutes. Yes, we did note that this was a lengthy speech. But, he’s not the only long-winded speaker we have come across. We’ve found plenty.

History doesn’t record the reaction of his audience. But it must have been an incredible sight. Because you can only guess the reactions of a modern-day participant! However, with his speech completed the former President allowed himself to be taken to hospital. Where of course, they patched him up before he made a full recovery.

I wouldn’t recommend such a course of action for any of our speakers unlucky enough to be ever caught in similar circumstances. There again, I wouldn’t recommend that a 90 minute speech should ever be inflicted on a modern audience. But, when you want to know how long should your speech be, then we can always help.

. The first volume won the Pulitzer prize and the second won much critical acclaim. The third volume is a roaring good read which is often not the case with the third book in a trilogy.

You can uncover plenty of public speaking tips with our regular series of tips for speakers, podcasts and videos dedicated to public speaking. And, with more than 100 top tips from which to choose, there really is something for every occasion. Plus, when you want to give your own public speaking skills an additional boost, then why not consider training. Because a public speaking training course will boost your skills and confidence together. So, when the time feels right, please don’t hesitate to get in touch.