Film-maker Michael Moore is certainly no stranger to controversy. So, his visit to Madison in Wisconsin at the weekend anticipated some action. Not least because he visited to support the unions in battle against the State’s reforming budget and the State Governor, Scott Walker. But this Michael Moore speech was a surprise. In fact he’d only decided to visit Madison, Wisconsin the previous night, and his audience was very receptive on that account. 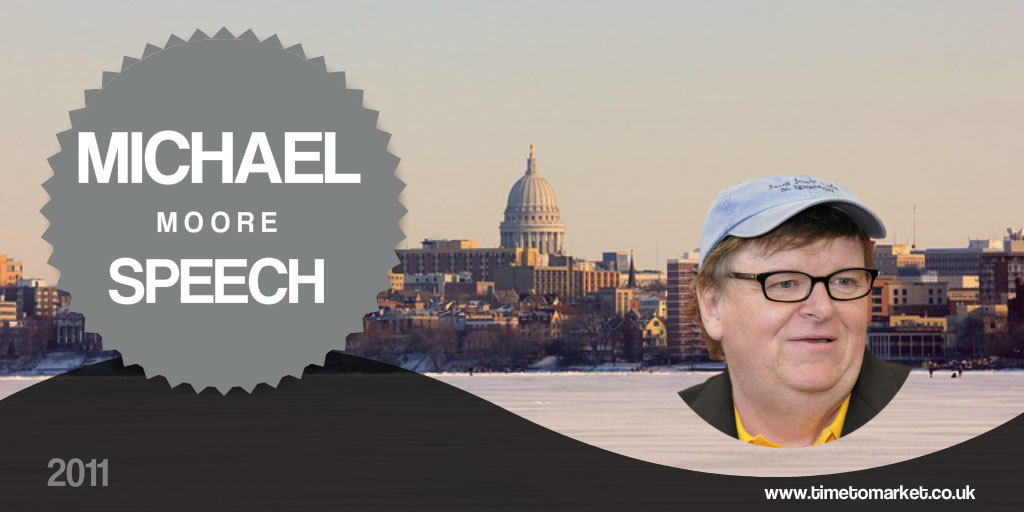 However, had he chosen to give an impromptu speech? Who knows, since he some notes with him. But, beyond his bizarre appearance–which in itself is nearly legendary–this speech was not short of rhetorical flourish. But it was also one superb piece of rabble-rousing speech making.

More a set of stories than a structured speech, this Michael Moore speech “America isn’t Broke” drew plenty of references to revolutionary events in Egypt and Tunisia. And, of course he references the undertones of economic chaos, joblessness and the rich: poor divide.

Reading from his prepared speech Michael Moore spoke clearly and eloquently at full amplitude. His language was robust, at times profane. The pace was precise and his pausing was designed for effect.

Rhetoric In This Michael Moore Speech

He asked rhetorical questions of his audience and then set about answering them.

Repetition featured to some extent:

Then, we also had a phrase reversing this not that:

His speech lacked precise structure but then his story-telling approach filled the gap. He has the essential characteristics of a rabble-rousing speaker…volume, anger and a crowd-pleasing affinity with the people. His audience appreciated his speech but I doubt that Governor Walker did so.

You can always discover plenty of public speaking tips with our regular series of tips and hints for public speakers and presenters. Perhaps, you might need some advice on the dress code for presenters? Certainly Michael Moore and the late Steve Jobs could appear as they want for a speech. But most of us have to consider the event. Plus, when you need some more focus on your public speaking skills, then why not consider training? Because a well-constructed training session can be invaluable for both skills and confidence. So, when the time is right, please don’t hesitate to get in touch.