President Mugabe celebrated his 88th birthday last week with a speech and a cake. His birthday cake took the form of a large crocodile. But there were some differences between this Mugabe birthday speech and earlier Robert Mugabe speeches. 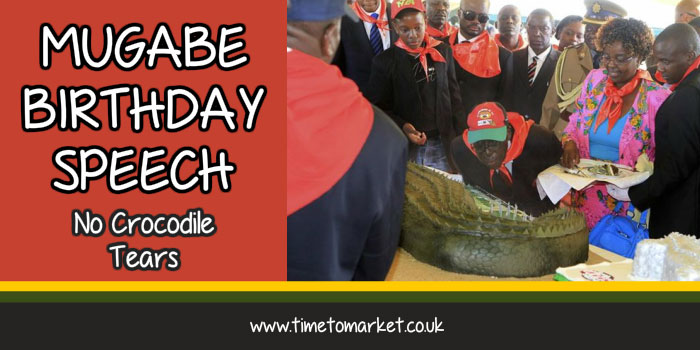 A Mugabe Birthday Speech For The First 88 Years

It’s not unusual to have a novelty birthday cake. Even for an 88-year old. But a great crocodile?

There is of course a precedent. And it might be significant. South Africa’s President P.W. Botha, a sworn enemy of Robert Mugabe, was known as the Big Crocodile, or Die Groot Krokodil, in Afrikaans.

Like Robert Mugabe he switched from Prime Minister to President. And he also reached the grand old age of 90.

Whether President Mugabe follows him in that respect will have to be seen. But his speech to a youth audience in Mutare suggests that his status is diminished and his powers are weakening. A toothless crocodile, perhaps.

This Mugabe birthday speech, more than an hour long, was greeted with casual indifference by his youth audience. There was no stirring them when his speech took in his trademark swipe at foreigners and gays. And his dominant themes of unemployment and HIV AIDS had little impact upon his audience. With unemployment at 90% that’s no real surprise.

Youth should play a part in socio-economic and political development through the indigenisation programme…Our vision is that the youth businesses will expand and grow and contribute to the economy.

A hungry, bored and restless audience instead greeted his speech with chatter and idle talk. Clearly disinterested, they wanted his speech to end.

There were no tears when it eventually did end. The President’s party quickly disappeared back to Harare and the audience sought out some refreshments.

With his powers of oratory dwindling and his speeches receiving little reaction you’d have to question whether this particular old crocodile has the capacity for another term, let alone a speech-filled campaign trail.

If you have to give a birthday speech, you can aim to get ready with a one to one public speaking coaching session. Because you can organise a personal coaching session at your offices or one of our 40 plus training centres. Please don’t hesitate to call for more details.