You really couldn’t describe the Prime Minister’s speech at University College Hospital (UCH) today as a rhetorical tour de force. But, as an NHS reform speech it certainly ticked the boxes. 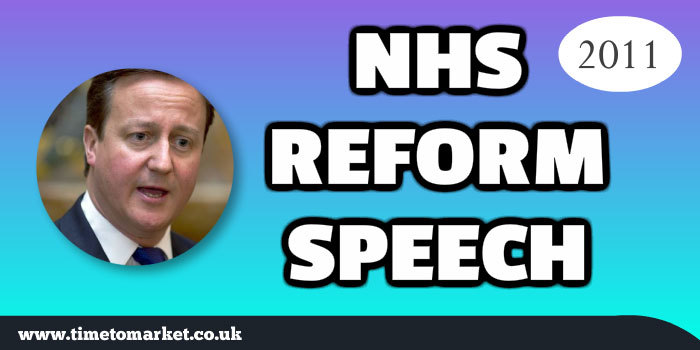 Yes, it had its moments:

We will not endanger universal coverage—we will make sure it remains a National Health Service.

We will not break up or hinder efficient and integrated care—we will improve it.

We will not lose control of waiting times—we will ensure they are kept low.

We will not cut spending on the NHS—we will increase it.

And if you’re worried that we are going to sell-off the NHS and create some American-style private system—we will not.

We will ensure competition benefits patients.

These are my five guarantees.

So, some good repetition and listing techniques in this NHS reform speech. Because, that’s exactly what we now expect from a David Cameron speech.

So, his NHS reform speech was notable for its use of colloquialism and plain speech. Thus, we heard:

and, from the TV screens,

And that’s not all.

I get that concern. I understand it.

That last one, of course, had to be explained for the non-cool in the audience. “Getting” something is also a favourite of the Labour Party Leader, Ed Miliband, as we heard in this progressive Miliband speech.

It’s true that we did get our fair share of: diverse, deliver, delivering, working together and transparency. These words are believed to be essential for any government speech. In truth,  they are not. They are now just jargon.

In his public speaking the Prime Minister is at pains to sound like a normal ordinary speaker. A plain bloke.

We all know about his silver-spooned upbringing. He doesn’t hide it. But unlike patrician ministers of an earlier age, his plummy vowels are combined with a more down to earth choice of words.

You can discover plenty of public speaking tips, hints and suggestions with our series of posts, podcasts and videos. Because with more than 100 top tips for speakers, there’s something for everyone. Plus, when you are ready to improve your own public speaking skills that bit further, then you can always consider a day’s training. Because a well-earned training course always improves skill and confidence. So, when the time is right, please don’t hesitate to get in touch.