So, it's farewell then Mr President. President Obama's two terms in office come to an end today. Some people might argue over his legacy. Still others might resist his achievements. Fair enough. But we have a personal agenda. Let's make that clear. We've enjoyed President Obama oratory over the last several years. 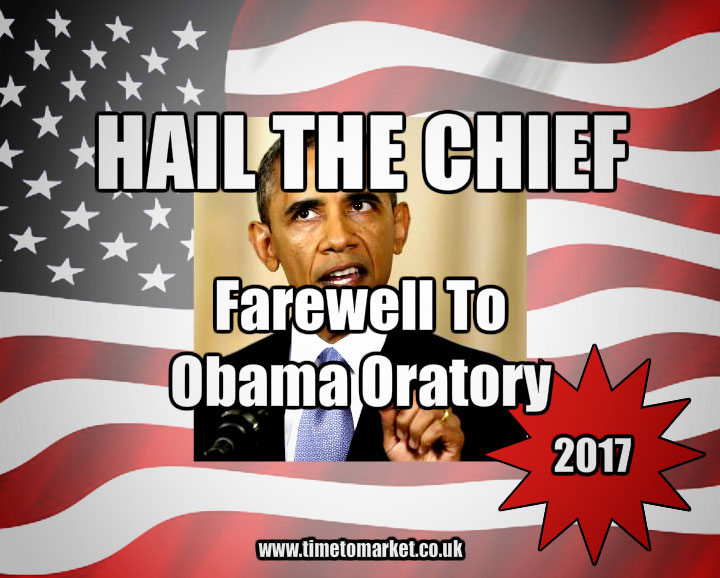 That's right. We are in the public speaking business. Speeches, presentations and rhetoric. Therefore, the President's oratory was a mine of source material, comment and technique over the last eight years.

For sure there are commentators who suggest that his public speaking isn't anything special. That he's aloof. Or that his speeches depend on the pause.

We think that's unfair. Yes, his public speaking delivery is clinical. It's positively methodical. But it works. It works, because the evidence suggests so. The outgoing President's popularity remains one of the highest of any outgoing President. That's some going in the USA. We argue that his public speaking, set-piece speeches and press conferences made the difference.

Those speeches were typically hard work. They probably involved auto cue. So, they were written by experts and prepared methodically. But it was the President who delivered them. And he nailed them. Whether it was after dinner speaking or speeches on the campaign trail, he achieved.

We don't know the president on a personal basis, just like most of us don't have that privilege.

But we don't consider his public performances aloof. If anything his speeches can be seen as charming and heartfelt. His anguish after mass shootings was plain for all to see during speeches and comments.

Certainly his performances at the White House Correspondent's Dinner over the years of his Presidency suggest humour. More than a touch of self-deprecation. And graciousness.

So, farewell then President Obama. We'll miss the Obama oratory. We can but hope that his successor's speeches prove as powerful.

You can learn all about tricks of oratory and other public speaking tips with a PresentPerfect public speaking skills course or coaching session. Please don't hesitate to get in touch when the time is right to discuss your requirements.