In this healthcare speech the President borrowed the mood for change from the classic Martin Luther King speech at the Lincoln Memorial speech in 1963. Thus, the President announced yesterday that, “the time for reform is right now.” 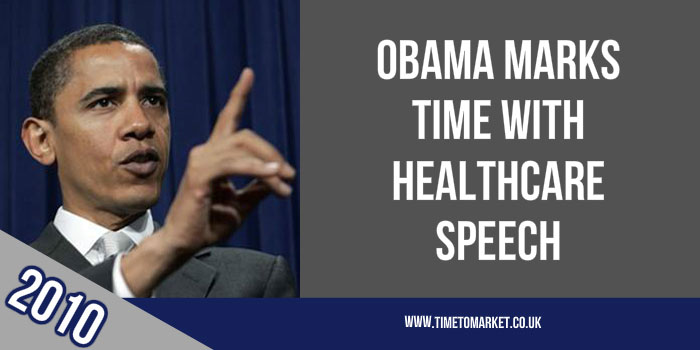 In a speech reminiscent of his Presidential election campaign the President wrapped up his healthcare reform efforts with a healthcare speech at George Mason University in Fairfax, Virginia.

To cries of, “Yes we can,” the President spoke assuredly as he set the scene. He described his last visit to the university three years earlier. Then, he recalled that no-one in Washington gave him a chance in his election campaign. And, he compared that situation with healthcare. Nobody in Washington thought he had a hope in his campaign to reform healthcare…and they are about to be proved wrong again.

So, an excellent contrasting technique and a great way to begin his speech.

Antagonism In This Healthcare Speech

Among a very receptive audience the President practically bridled with antagonism towards American insurance companies and special interests lobbying Congress. Most of them, of course, just across the river from George Mason University.

He made powerful use of a classic phrase reversal:

As he spoke with the aid of an autocue, the President emphasised with a list of three the changes on which Congress will vote.

For each one, he summarised each point before moving on to its successor.

Since he had already presented himself as a Washington outsider, the President began his conclusion with:

His conclusion repeated the reference to his election campaign of three years ago. Thus, he forced the linkage between the hopes and aspirations of his audience, previous struggles, previous campaigns and the likelihood of success:

We are going to fix healthcare in America with your help.

“The time for reform is now. A century long struggle will culminate in a historic vote.”

Yes, this was a well-worked and well-practised speech. But, the one discordant note? The President’s line: “At the end of the day…” Cliché.

This style, if not the tag line, is something that the President is clearly working on. Just take a look at his Rose Garden speech of 2011. The cry of “Yes we can” is replaced with “Let’s pass this Bill”. Excellent.

You undoubtedly want to make sure that you are ready for your next big speech, on healthcare or any other topic. So, why not consider a one to one skills refresher. Because you can book a half-day coaching session at your offices, or one of more than 40 training centres, you are never that far away. Aim to boost your performance for your next big speech. Please don’t hesitate to call.