It says something about the current European economy when every speech on the subject is soaked with metaphors alluding to storms, deluges and torrents. Only last month we had a stormy Cameron speech. So, the Chancellor of the Exchequer’s Mansion House speech this week was no exception. 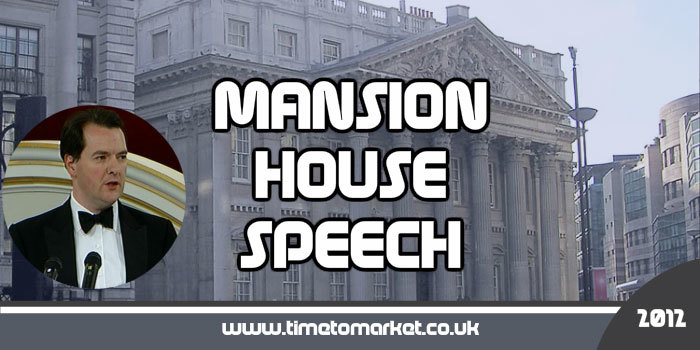 Of course no amount of competitive edge can protect this country completely from the financial storm raging around us.

And it’s our response to this storm that I’d like to address tonight.

We are not powerless in the face of the eurozone debt storm.

Humour In The Mansion House Speech

But crises apart, the Chancellor can have fun with his speech. He did so in his introduction when he made a clever reference to the recent celebration of the 400th anniversary of the Board of the Treasury:

At the time, the European economy was weak, the Kingdom of Spain was burdened with debt, and the excesses of the popular news sheets were giving the Government a headache.

Thankfully, Lord Mayor, we have no such concerns today.

He used such references and quotations particularly well. Referring to a former Prime Minister he noted:

On this occasion at least, Lady Thatcher was foiled by the Treasury.

That didn’t happen often — she once famously declared “I am extraordinarily patient, provided I get my own way in the end”

This was entertaining stuff for his audience of finance professionals who must be tiring of doom-laden speeches from politicians and regulators.

Challenges Ahead For The UK

Mr Osborne’s mansion House speech didn’t aspire to be doom-laden. It went to great lengths to highlight the challenges but also to note the UK’s response. And he weaved this into the very structure of his speech:

First the British Government’s macro-economic strategy and the thinking behind it.

And secondly, our position on the eurozone crisis: what needs to be done, what might actually happen, and how we see Britain’s interests.

Beyond such a simple structure for this lengthy speech he also used a theme to good effect:

Weaving such a theme into the fabric of his speech was far from problematic. His audience would have guessed the theme had he not pointed it out.

Rhetorical Flourishes In This Speech

Of course we had some rhetorical flourishes that we now expect from the Chancellor’s speeches. We heard a good then and now reference:

One year ago I said we would accept in principle its core recommendations.

Today, we publish a White Paper setting out how the Government plans to implement those recommendations in detail.

It’s true that this wasn’t in the same league as Martin Luther King’s 100 years later comparison in his Lincoln Memorial speech of 1963. But it did work.

His speech included some characteristic repetition and short sentences, though not as much or as many as we hear in his campaigning speeches:

None of these things have been easy.

All have been controversial.

All were opposed by all manner of pressure groups and Unions.

All are vital if this country is to have a dynamic future.

His Mansion House speech also made two references to taxpayers. Now there was a time when taxpayers didn’t get a look-in with political speeches. It was all about government money or government spending. I sense that the Taxpayers Alliance has been effective here with the Chancellor’s language.

We also heard a rare mention of the word, future. Now that might be a surprise for some but most political speeches refer to forward or forwards. For example the Chancellor’s speech did note:

Looking forwards, it is very hard to argue that monetary policy — in all its forms — has run out of road.

This seems to be based on politicians putting forward motions (proposing something). So it was refreshing to hear the Chancellor use the right term, eventually, when discussing the opposite of the past:

The Government has sought to keep the British economy safe in the storm, while sharpening our competitive edge for the future.

So the same argument applies for the future as for our recent past.

This proved to be an engaging speech from the Chancellor whose public speaking has come on in leaps and bounds since 2010. If only we could say the same for his Budget management.

You can read more public speaking tips, hints and suggestions with our regular series of posts, podcasts and videos. And, when you want to boost your public speaking skills then you can always consider either training or coaching. So, when the time is right, please don’t hesitate to get in touch.