Why You Should Practise Your Speech

More Speech Practice For The President

We all know that there are some very good reasons why you should practise your speech. However, when it comes down to the speech itself, well, we tend to forget these very good reasons. Therefore, we become oblivious to the need to rehearse and practise. So, President Trump's speech gaffe last week during the United Nations (UN) meeting is a salutary lesson in why we should practise a speech. 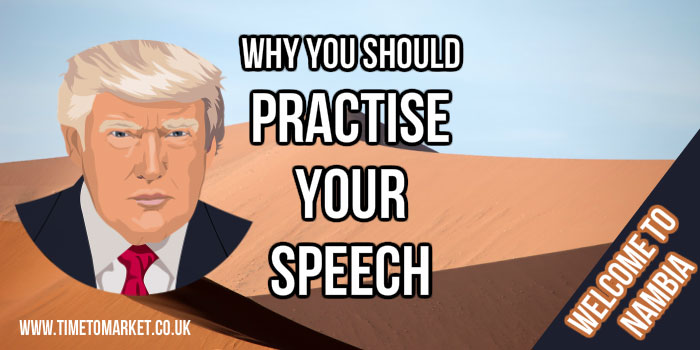 The President's speech took place at the Lotte New York Palace Hotel in New York with an invited audience of Africa's leaders. So far so good. But, it just couldn't stay that way.

President Trump Proves The Need To Practise Your Speech

Because in his opening remarks he managed to mispronounce the name, "Namibia." So, it became "Nambia."

Thank you very much, General. I appreciate it. And I’m greatly honored to host this lunch, to be joined by the leaders of Côte d’Ivoire, Ethiopia, Ghana, Guinea, Nambia, Nigeria, Senegal, Uganda, and South Africa

So what went wrong? Well, apart from mispronouncing "Namibia" on two separate occasions in the same speech, not that much. But, of course, that's not the point.

Since his failure to pronounce "Namibia" in the correct fashion inspired a whole twitter storm of mockery and jest. At his expense. At times like these, it really must be tough to be the President!

People in general, commentators and journalists all missed whatever points he wanted to make in his speech. Because everyone was fixated on "Nambia." Good fun, but not if you happened to be in the audience.

So what should you do? Well, you should rehearse. You should snatch some speech practice. And that shouldn't be unusual for the President. Because we spotted him rehearsing a speech earlier this year. Albeit, at the last minute. So he does know that he has to practise his speeches.

WHY YOU SHOULD PRACTISE YOUR SPEECH

So, you can see for yourself what could happen when you don't practise your speech. It can be catastrophic. Because even the President of the United States can't afford to overlook his need to practise.

You too can practise your speech with a public speaking skills refresher from Time to Market. This half-day skills practice session is just the tonic to get you ready for your next big public speaking event. Please don't hesitate to get in touch when you feel the time is right for more inspiring practice.