Full Marks For President’s Back To School Speech

President Obama’s Back to School speech this week generated much less hostile reaction than his speech last year. Undoubtedly there were some schools that didn’t allow the President’s school speech to be shown. But many more had no such qualms. Despite the concerns the President appears determined to continue speaking about education to students at the start of each school year. 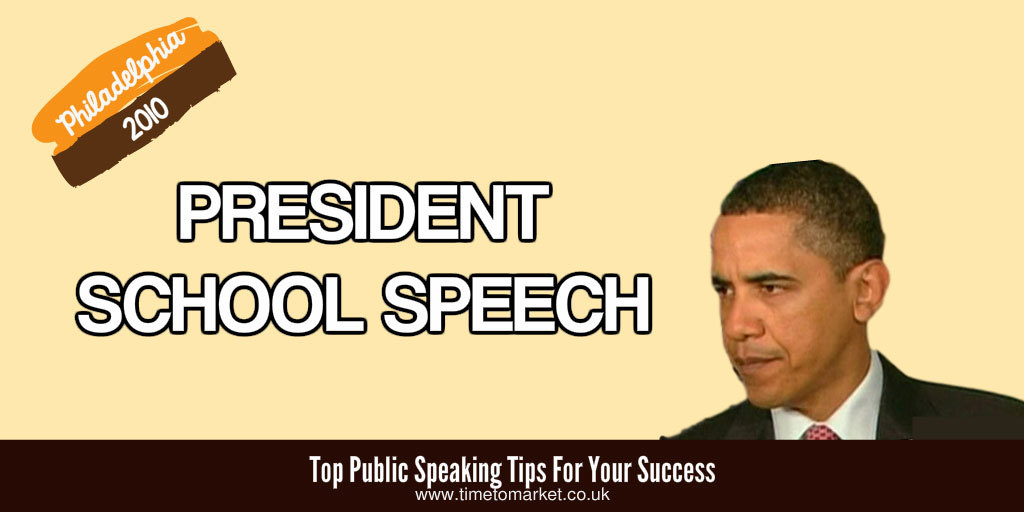 The Julia R. Masterman Laboratory and Demonstration School in Philadelphia, PA, was the scene for this year’s speech. And the theme? My Education, My Future.

The President’s school speech included some well-used references to his life at school. Noting the value and importance of education he implored the country’s student to work hard and earn good grades.

He used examples from his life, that of Michelle Obama, his family and students across the country…each with some very tough backgrounds.

The President also referenced his first Commencement Challenge in 2009 and the winners in Kalamazoo. That was an occasion we featured with the President Obama Kalamazoo speech.

“Last year I was in Michigan at Kalamazoo and had just a wonderful time. Although I got to admit, their graduating class was about 700 kids and my hands were really sore at the end of it because I was shaking all of them.”

The President was on typically ebullient form. His delivery was slow and measured and with passion

His final thought in the school speech:

“So my main message to all of you here today: I couldn’t be prouder of you. Keep it up. All of you I know are going to do great things in the future. And maybe some time in the 21st century, it’s going to be one of you that’s standing up here speaking to a group of kids as President of the United States.”

So, a short President’s school speech at less than 17 minutes. But it certainly lays down the challenge for the USA’s public schools.

Of course you can read plenty of public speaking tips with our series of tips, hints and suggestions. And with more than 100 top tips for speakers and presenters, there’s something for every speaking opportunity. Plus, when you want to give your public speaking skills a further boost then you’ll find a training course or coaching session a welcome addition. So, when the time is right, please don’t hesitate to get in touch.