Recycled speeches. Do they work or don't they? Well, for Michael Gove, who spoke at the Conservatives party conference today, they do work. Yes, they work, because we heard a whole range of arguments today for Brexit. Albeit, with his new Ministerial responsibilities, this was very much a Green Brexit recycled speech. 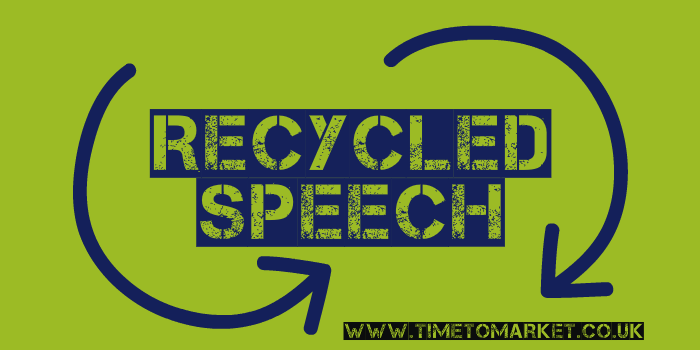 A Recycled Speech By Michael Gove Combines Brexit And Green

Michael Gove made a very good stab at weaving recycling into his speech. He is of course no slouch when it comes to solid speech writing practice.

It’s wonderful to be here in Manchester – speaking to you as Secretary of State for Environment, Food and Rural Affairs. The fact that I’m on this stage this year is proof that this Government is committed to recycling. And, let me tell you, no-one is a bigger supporter of re-using once discarded material than me.

This well-timed and perfectly delivered speech had its bizarre moments. We noted the other day how conference speakers tie their speech in with their audience, notably by thanking key players in the room. Michael Gove's recycled speech did that with a vengeance. I don't recall such a long list of characters before. Bizarre.

Recycled Speech Has A Point

Did this recycled speech have a point? Yes, it brought Michael Gove back to the fold. It's true that he's not the darling of the conference. We did hear the muted applause, and it was muted. That "darling" accolade has to go to either a Boris or a Ruth. But his speech also established firmly and squarely a clear Tory green agenda led by an eloquent top table operator. It's true that Owen Paterson proved more than capable in his tenure. But he never had the star quality of Mr Gove.

So this speech was both a Green agenda speech and a Brexit recycled speech. Both were weaved into the whole, seamlessly. Near perfection.

We have to say that we've missed Mr Gove's speeches. And that's not because he's our local Surrey Heath MP. No, we've not met. But it's the content and the sentence construction that he brings to his speeches. That's what we appreciate. Not for Mr Gove a series of endless lists (forgetting his earlier list of thanks, of course).

So, how about this section? Country File or Farming Today, anyone?

The number of farmland birds has reduced by more than half, pollinators such as wild and honey bees have suffered a drastic decline in numbers, and our rivers and chalk streams have seen fish stocks decline and small mammals disappear. On top of that, the CAP has channeled hundreds of thousands of pounds of taxpayers’ money to the already wealthy, simply because of the amount of land they have. That is plain wrong.

You just don't get this sort of material from other political speakers. So, recycled speech or not, welcome back, Michael.

Recycled speech or brand new content, you can always practise your next speech with a Time to Market speech rehearsal slot. So when you need some critical attention for your speech, then you've got it. When the time is right, please don't hesitate to get in touch.