At what stage does lateness become rudeness? When you are the main speaker on the podium there’s really no excuse for lateness. Unless, that is, you happen to be the President of the United States. President Obama is characteristically ten minutes late or so for his speeches. If it’s design then it’s done faultlessly. That’s because his lateness builds anticipation and expectation among his supporters, as much as it aggravates everyone else. So, this Rose garden speech was a case in point. 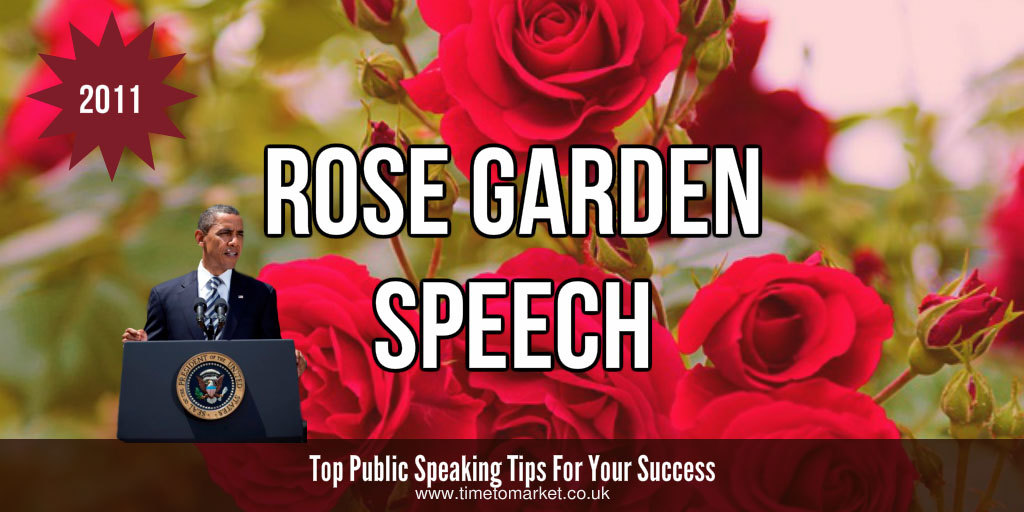 His speech today in the White House Rose Garden was no exception. His ten minute speech began ten minutes late. By design.

And the design extended further to his new catch phrase:

So “Let’s pass this bill” featured throughout his speech. As a form of repetition it worked. But I sense that his supporters won’t grab this phrase quite so readily as its predecessor, “Yes we can.”

Design was also evident with his surrounding human props. He’s used white coated medics as a backdrop when he spoke about his plans for medical care reforms and today he surrounded himself with a good mix of anyone likely to benefit from the new jobs creation bill:

Rose Garden Speech Puts The Country Back To Work

It worked, but the human throng was looking a bit edgy as the minutes ticked by and they waited for the speaker himself to arrive. We should, of course, note that the late technique doesn’t always work as this Baroness Scotland speech show. Or, indeed, this President Jonathan speech, where the President failed to show up at all! As a public speaking technique this is the stuff of political campaigners…not the typical conference speaker!

For a rose garden speech by the president, this works. But for everyone else, let’s pass this technique by.

You can always discover plenty of public speaking techniques with our series of top tips for speakers and presenters. Because with more than 100 top tips, there’s something here for every occasion. Plus, when you want to take your public speaking that bit further, then you’ll find that a training course will always help. Because a course will boost both your skills and your confidence. So, when the time is right, please don’t hesitate to get in touch.