Sir John Vickers, Chairman of the Independent Commission on Banking, outlined his thoughts in a speech given at the London Business School and University of Chicago Booth School of Business Conference. Sir John’s an erudite and seasoned academic economist with experience of the Bank of England, where he was Chief Economist and a member of the Monetary Policy Committee. So, this Sir John Vickers speech was welcome. 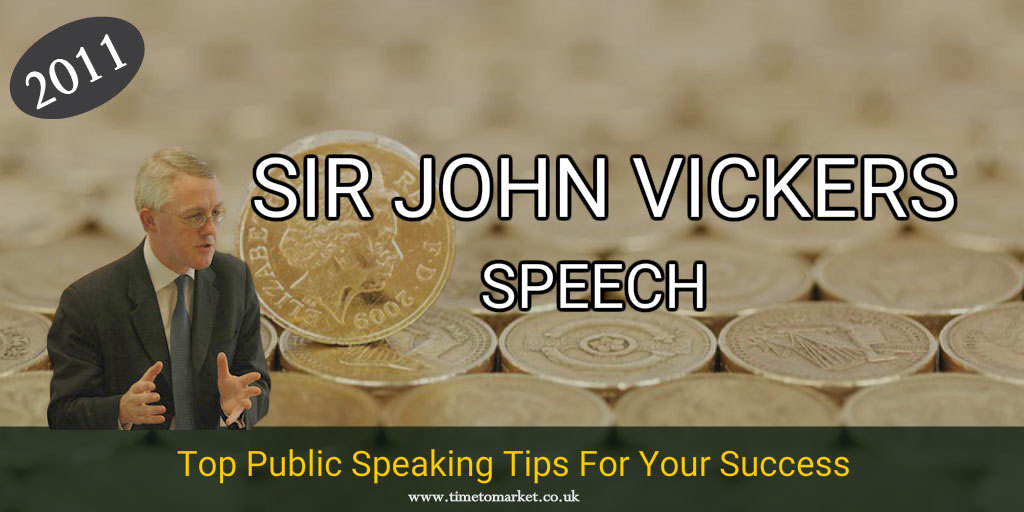 His Commission, set up by the Coalition Government in June 2010, intends to give its recommendations on avoiding a repeat of the last systemic banking collapse. So far, so good.

Indeed, the introduction to his speech made all that very clear.

His speech noted how the Commission had three broad aims. This looked like good segmentation of his material and a memorable list of three.

However, things went a bit opaque when Sir John’s speech introduced a question:

“The broad question that I want to raise today is whether, and if so how, structural reforms might relate to other reform initiatives, especially those to enhance banks’s capital structures and the credibility of their recovery and resolution plans to cope with crises?

As a public speaking technique to open his speech, so far so good. But the question had many parts. And those parts presented problems of confusion later.

He tried to qualify his question with:

“My focus today will however be on financial stability.”

Remarkably his speech defined both retail and investment banking for his audience:

“By “retail” I mean not just payment services and deposit facilities, but also activities such as mortgages and SME lending. By “investment” I mean wholesale and investment banking services including lending and operational services to large corporates as well as trading and other capital markets-related activities.”

That definition was unexpected and welcome. Yes, his speech featured jargon. But it was the sort of jargon that’s become familiar to a generalist audience since Northern Rock began its wobbles in September 2007. To his academic audience the jargon was not an issue.

He used rhetorical questions within his speech—marking out different sections and passages quite neatly.

“So how to increase loss-absorbing capacity?”

Sir John could aim to personalise those questions. If he did so he could expect to achieve a better effect. But it worked.

Some of the sentences in the speech were long. And one or two were spectacularly long:

“Credible resolution would seem to require at least some form of separability, and arguably there is a case for some form of ex ante separation so that bank operations whose continuous provision is truly critical to the functioning of the economy can clearly be easily and rapidly carved out in the event of calamity.”

That was a pity since he didn’t really give himself or his audience the chance to finish their understanding. Introducing new material to the end of your speech creates problems. He could have referred to the broad question he raised when he outlined the aims of the Commission near the start. He didn’t. So his final words were:

“These and other issues will be central to the ICB’s agenda in the coming months.”

A disappointing conclusion to an in-depth and well-structured outline of the work of the Independent Commission on Banking.

Of course you can discover plenty of public speaking tips with our series of top tips for speakers and presenters. Because with more than 100 tips, podcasts and videos, there’s something for every public speaking event. Plus, when you want to invest in your own speeches, then why not consider training. Because a well-timed public speaking course is always a good choice for success. So, when the time is right, please don’t hesitate to get in touch.