Who do you think will give the speech when you retire from the office or workplace? A good colleague, an adversary or your boss? Well, yesterday was not quite the final day for Speaker Bercow in the House of Commons, but it was a day for speaker retirement speeches. And so we heard both the Prime Minister and the Leader of the Opposition give farewell speeches on behalf of the House. Colleagues or adversaries? You decide. 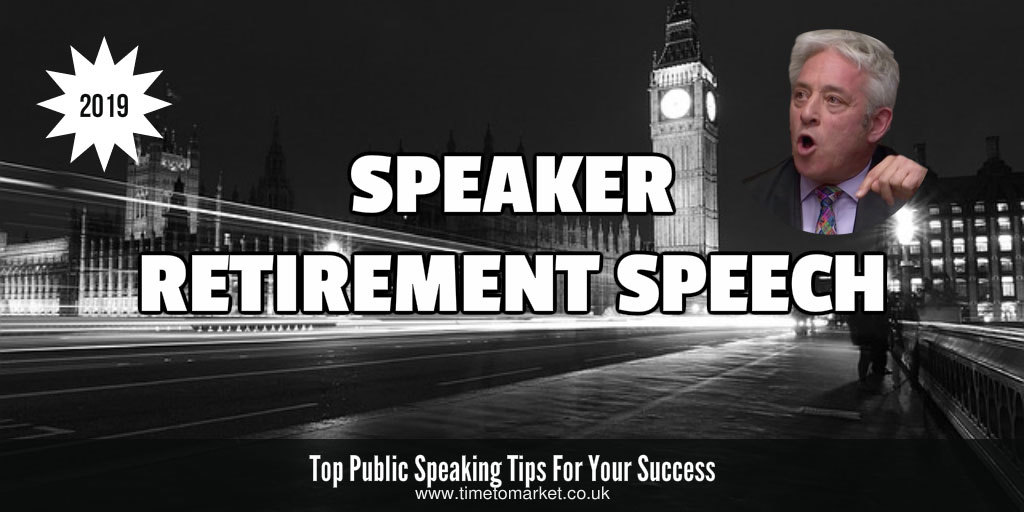 But the speeches themselves? Short, sharp and witty. And, of course, that really is the point of a goodbye speech. So no matter that this was a Speaker retirement speech, we had some very capable remarks from both Party leaders.

Boris Johnson began his speaker retirement speech with a powerful simile, noting the Speaker's fondness for tennis and perhaps the 1983 film, Scarface.

As befits a distinguished former Wimbledon competitor, you have sat up there in your high chair not just as an umpire ruthlessly adjudicating on the finer points of parliamentary procedure with your trademark Tony Montana scowl, not just as a commentator offering your own opinions on the rallies you are watching—sometimes acerbic and sometimes kind—but above all as a player in your own right, peppering every part of the Chamber with your own thoughts and opinions like some uncontrollable tennis-ball machine delivering a series of literally unplayable and formally un-returnable volleys and smashes.

And, of course the Prime Minister was very clear over their disagreements. However, he went beyond civility. And that's the hallmark of a good retirement speech.

Although we may disagree about some of the legislative innovations you have favoured, there is no doubt in my mind that you have been a great servant of this Parliament and this House of Commons.

A Final Word Of Goodbye

In his concluding comments he couldn't help but making one or two more quips. Quips that were clearly appreciated by the Speaker and the House.

…and you have cared so deeply for the rights of Back Benchers that you have done more than anyone since Stephen Hawking to stretch time in this session. As we come to the end of what must be the longest retirement since Frank Sinatra’s, I am sure the whole House will join me in thanking you and hoping that you enjoy in your retirement the soothing medicament that you have so often prescribed to the rest of us.

He then clearly noted the help and assistance provided by the Speaker during the course of the last year.

You have given real power to Back Benchers, vastly expanded the use of urgent questions, which has been overwhelmingly popular with all Ministers, and opened up the number of emergency debates, which is even more popular with even more Ministers.

His conclusion was also top drawer for a retirement speech.

I want you to accept our thanks and pass on our best wishes to Sally, Freddie, Oliver and Jemima, your wonderful family, for the support they have given you. There will be a great celebration today—I am sure the whole House will join us in this—when you and I celebrate Arsenal beating Liverpool tonight.

Unfortunately the football result went the wrong way for the Arsenal. But, you can't have everything on your retirement.

So, as retirement speeches go, these two speeches in the Commons are certainly excellent examples. Civil, witty and a bit poignant.

What To Say When You Give A Retirement Speech

You don't have long for a retirement speech, a few minutes at best. So, you need to make a good impact, quickly. But, don't rush your efforts. Because no-one wants to listen to a rushed speech.

When you have to give a retirement speech at work, then you will find plenty of top public speaking tips with our regular series of tips, skills podcasts and training videos. And with more than 100 top tips for speakers, there's something for every occasion. Plus, when you are ready to take your own skills that bit further, then please don't hesitate to get in touch. Because you'll certainly find a training course or public speaking skills session will work wonders for confidence and delivery.