There’s hope for all of us. Everyone faced with the daunting prospect of learning a keynote speech. It seems that even movie actors can struggle with the arduous task of memorising their speeches. Even Leonardo DiCaprio can have a speech problem 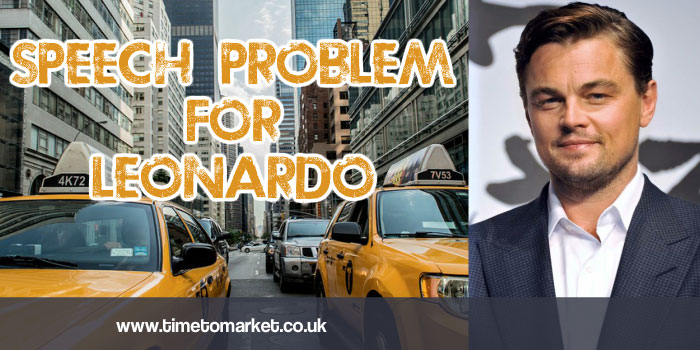 A Speech Problem For LeonardoDiCaprio

The news is that Leonardo DiCaprio was worrying so much about learning a four page monologue that he succumbed to a strep throat induced speech problem. Mr DiCaprio was on the set of the film The Wolf Of Wall Street where he was meant to be giving the speech, on camera, in front of some 600 movie extras.

But I had never had a monologue like that in my life–I mean, [one] went on for four pages. It was amazing. And there was such a lead-up to it, it was almost like an adrenaline dump. And I immediately got sick. I was supposed to get up there in front of 600 extras and give this giant Braveheart-like speech on greed, and my throat just seized up. I got strep throat.

Learning a speech is typically the preserve of stage actors prepared to learn and deliver their lines once or twice daily for a theatre run of several weeks or months.

It’s hard work…taking time, effort and patience. As a rule it’s not for managers and professionals with plenty of other things to do. Yes, there are exceptions to the rule.

But it remains rare for a business manager to even try to learn a speech let alone actually deliver that speech without notes. And there’s the rub. Giving a speech without notes can be highly dangerous. If it goes wrong the fall-out is personal and corporate damage. Hence the enormous stress. Because it’s just not worth it. So, it’s always best that you prepare for public speaking problems.

How To Get To Grips With Your Speech Problem

Winston Churchill told the story of how he fluffed his lines. A spectacular speech problem trying to deliver a speech without notes to a Trades Union meeting. The experience was so mortifying that he never tried it again. Notes or scripts every time after that experience. It worked for him. And it works for most other professionals.

Modern day politicians stick to notes, scripts and autocue from preference. When they speak without notes there’s either a problem or a spectacular success. No middle ground on that debate. Very dangerous indeed.

So, Boris Johnson’s speech last week was a case in point. Speaking off the script he dived headfirst into a debate on comparative IQs, achievement and social status. Amazing, because this remarkable upset might have scuttled the career of a lesser politician.

Is there a lesson to be had from DiCaprio and Mr Johnson? Of course, you can try to learn a speech at your peril. Or, you can take the alternative line. Come close to learning the beginning and ending to your speech. Then, become totally familiar with your speech’s content, logic and flow. Achieve all that and you won’t have a problem with your speech.

Well, that’s typically the plan. But Brian Paddick has found that talk is not so cheap with a House of Lords speech.

Of course, you can always join a public speaking skills course to find out more tips and hints so you can overcome a speech problem. You can train at your offices. Or, perhaps, at one of more than 40 training centres in the UK. So, when the time is right, please don’t hesitate to call and discuss.