The Long, The Short And The Ugly

State Of The Union Addresses

They are constitutionally mandated to update Congress on the state of the union. But the US President isn’t required, by the Constitution, to give State of the Union addresses to the two Houses. That’s because earlier Presidents considered that giving an address before Congress was too similar to the practice of the British Monarch. Monarchs spoke before Parliament and outlined their government’s policies. That’s what we know today as the Queen’s speech tradition. So, early Presidents of the USA chose a written report to Congress. And that practice ran for a very long time. 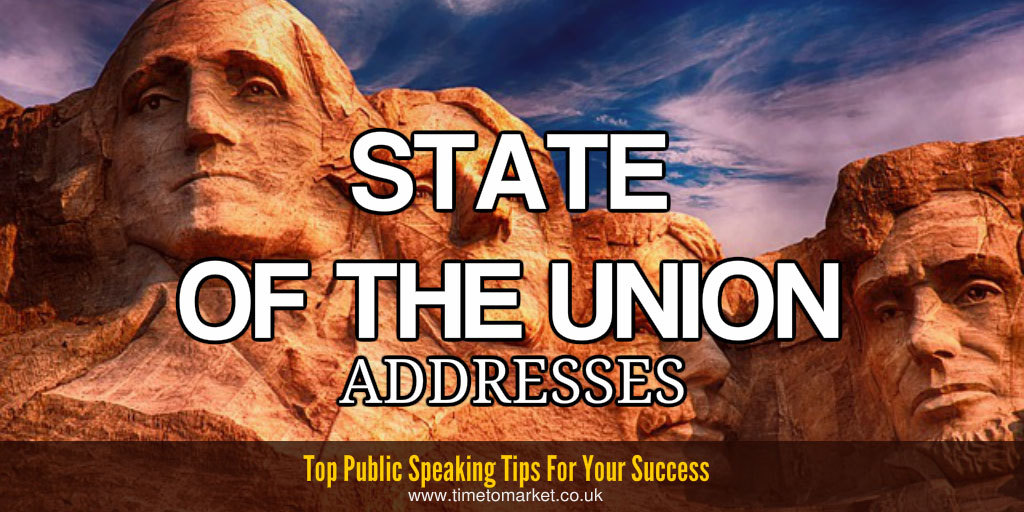 State Of The Union Addresses In The USA

But today’s President would probably be unwise to pass up such a prime-time public speaking opportunity. Not least because it’s televised and now webcast around the nation. The White House even launched its own app in 2010 to boost listening figures for the President Obama State of the Union speech. Of course they have to be invited to give their State of the Union address. And that invitation comes from the Speaker of the House of Representatives for typically, a January date. There’s a let-off, however in their first year as President.

Lengthy State Of The Union

President Jimmy Carter presented a written state of the union to Congress in 1981, but that’s the modern exception. That written address, some 34,000 words, was the longest ever presented to Congress…fortunately no-one had to listen to it. Can you just imagine? That would take nearly four hours to deliver

Gerhard Peters of the American Presidency Project at the University of California, Santa Barbara, has researched all the State of the Union addresses, with some unusual findings.

That record goes to Bill Clinton’s speech before Congress in January 1995. On that occasion he spoke for one hour and 25 minutes. His State of the Union address contained 9,190 words and clearly went at a pretty sedate pace. That’s no bad thing for an audience. Because your public speaking pace really matters.

That speech in 1995 was good for Bill Clinton’s averages. In seven State of the Union speeches he averaged 7,400 words. That’s some average compared to the speaking record of the first President. President George Washington averaged 2,080 words in his eight State of the Union speeches to Congress. It’s no surprise that the country’s first President has the record for the shortest speech—1,089 words…about ten minutes worth or so.

A Casual Approach To The State Of The Union Address

George Washington’s speeches were definitely becoming longer towards the end of his presidency. But they appear casually brief by today’s standard. That’s modern government for you. So much more to say!

You can discover plenty of public speaking tips for your next company wide address or public meeting with our series of top tips. And when you need to take your own public speaking skills that little bit further then why not consider some in-depth training or coaching. Because a well-timed intervention now will pay speech dividends later. So, please don’t hesitate to get in touch when the time is right.