Team GB athletics team captain and world 400 metres hurdle champion Dai Greene used a captain’s speech to inspire his team this week. He gave his team captain speech at the team’s training camp in Portugal on the eve of the London 2012 opening ceremony. 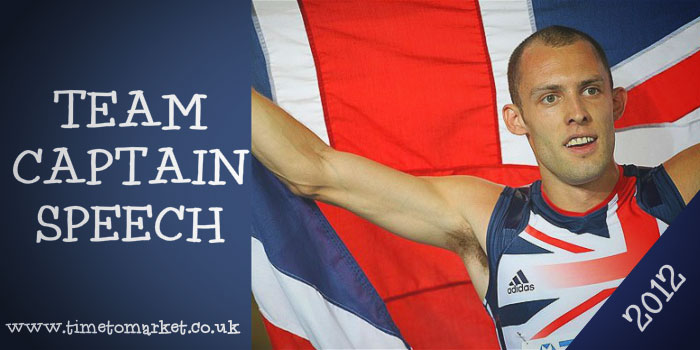 He’s had a mighty hard slog to get to where he is right now in athletics. And he therefore used this sacrifice in the words and personal story he noted in the team speech.

In his team captain speech he made clear that all the athletes should count themselves fortunate to be fit for the home Olympics. He used the example of runner Steph Twell who will miss the Olympics through injury:

Use Steph’s story to appreciate what you have and think about how she would give anything to be in your shoes when you get to the start line and use that to inspire you.

You might expect him to litter his speech with athletics metaphors. So, he duly obliged:

Set the bar high, don’t be content with making the team. Don’t look back in 10 or 20 years and think you wish you’d done things differently. Aim for your own gold medal, whatever that may be.

Excellent motivating stuff on the eve of the Games.

He also managed to mix some good self-deprecation with an easy nod towards the redoubtable head coach, Charles van Commenee:

When Charles van Commenee called I thought it was bad news … then I thought he had picked me because I was like him … handsome, with charisma and I also can be hard work.

This was good public speaking technique in action. Let’s hope that technique will stay with him as he clears the hurdles in the days ahead.

Other Ideas To Motivate With Your Team Captain Speech

You might find further inspiration with the list of motivating speeches prepared for the England 2010 team by LoveFilm. There are some great movie speeches in the list.

But, you can also discover more tips for a great leadership speech with our public speaking tips. And, you always pick up new tips about public speaking with a coaching session. Each session, held at your office, or one of our training centres, gives you the confidence you need for success. So, please don’t hesitate to call and discuss further.