Delivered By A Labour Government 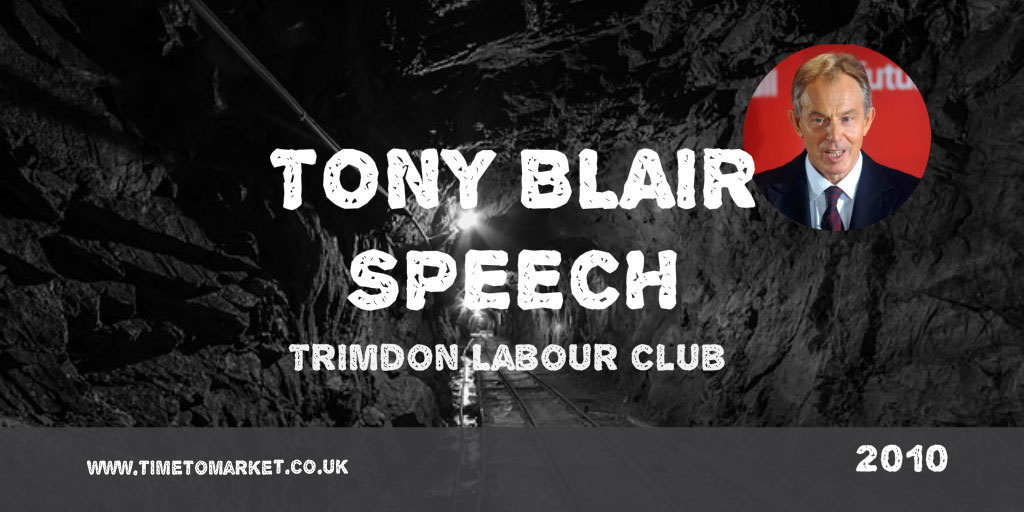 This Tony Blair speech certainly turned the clock back for many. Not least as they listened to a former communications master who now earns a lot of money from his conference speeches. But this one was free to air. Albeit, he didn’t take questions from the assembled news journalists or Sky News who managed a brief video of his speech.

So this Tony Blair speech struck an overtly optimistic note about Britain’s economic chances, as he used his full armoury of rhetorical devices. “Not only” and “Not just” contrasts were much in evidence:

“…not for catastrophe but for recuperation.”

“…This did not happen by chance; but by choice.”

“…the anxiety has not abated, it continues.”

And talking about the question mark over the Tories, he said:

“It has grown not faded.”

Struggling With The Metaphors

A classic. Elsewhere his metaphors struggled for consistency, mixing images of the wild woods with those of storm-tossed seas and clichés such as “corridors of power.”  His first references to the financial sector’s collapse in 2007 and 2008 was :

“We are not out of the woods yet; but we are on the path out.”

“the brink of catastrophe” and “The spectre of prolonged recession stalked the corridors of economic and political power.”

“…a deluge such as this,” and “though the sea is still rough, the storm has subsided.”

The much sought after sound-bite was there too:

“At the moment of peril the world acted. Britain acted. The decision to act, required experience, judgement and boldness. It required leadership. Gordon Brown supplied it.”

Turning to non-financial policies this Tony Blair speech laid out the key performance of his government and that of his successor. He applied a repetition technique to good effect. Every positive outcome of the government was followed with:

“Delivered by a Labour Government.”

He repeated this six times to good effect.

So, this Tony Blair speech was a bold intervention certainly. It set out an optimism for a future with Labour and regaled his selected audience with the question marks and uncertainties of a Conservative government. When choices and decision are needed, then that’s the sort of speech we can expect from the last Prime Minister.

You can discover plenty of public speaking tips and other great resources with our regular series of posts, podcasts and videos. And, when you are ready to grow your own public speaking skills, then you can always join a public speaking course. Or, we can organise a tailored course for your own team. So, whatever the situation, please don’t hesitate to get in touch when the time is right.