We haven't made much note of previous Trump speeches. But this one caught our attention.

Since this Donald Trump speech in Charlotte, North Carolina appears to mark a new departure. And perhaps that's necessary after the recent problems. 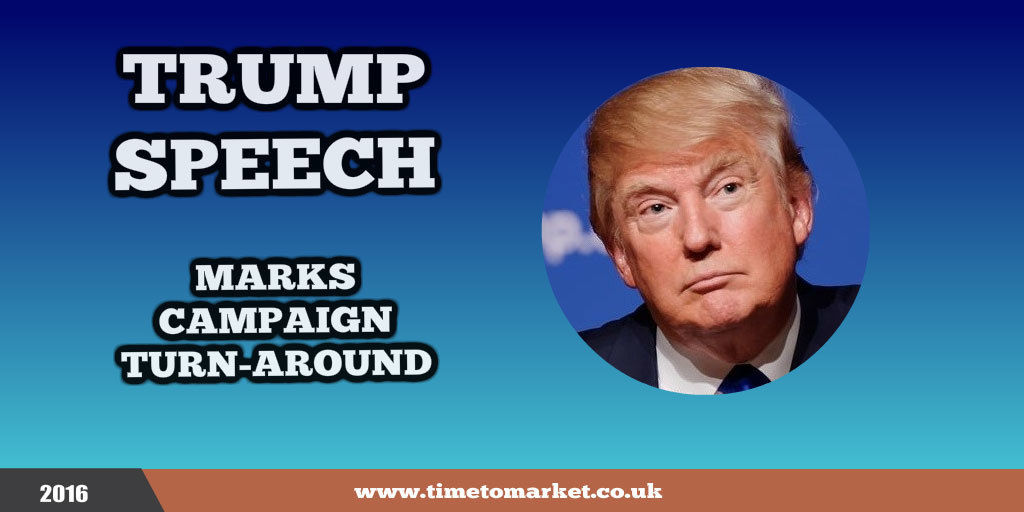 The Trump speech was delivered with autocue (teleprompt). And that made for better delivery, timing and a focus on the key issues. Because previous efforts often deteriorated off-script.

We've seen how some commentators have railed against Mr Trump for reading his speeches! Oh dear. Their concern might be driven by a recognition that a scripted Donald could be less gaffe-prone. So less fun for the commentators!

Because that's why he's now speaking with autocue. He aims to stay on message and keep to time. So he wins that election.

So, there's a hint of rhetorical flourish to this speech.

I speak the truth for all of you, and for everyone in this country who doesn’t have a voice.

I speak the truth on behalf of the factory worker who lost his or her job.

I speak the truth on behalf of the Veteran who has been denied the medical care they need – and so many are not making it. They are dying.

I speak the truth on behalf of the family living near the border that deserves to be safe in their own country but is instead living with no security at all.

With autocue his delivery was slow yet steady. There was lots of time for essential audience feedback…oohs, ahs and other agreements.

And, I will never, ever stop fighting for you.I have no special interest. I am spending millions of dollars on my own campaign – nobody else is.

My only interest is the American people.

"I will never, ever stop fighting for you."

But the sharp edges are still there. Because he's not quite the polished article yet. For example, his introduction was clumsy:

Tonight, I’d like to talk about the New American Future we are going to create together.

Last week, I laid out my plan to bring jobs back to our country.

On Monday, I laid out my plan to defeat Radical Islamic Terrorism.

On Tuesday, in Wisconsin, I talked about how we are going to restore law and order to this country.

Let me take this opportunity to extend our thanks and our gratitude to the police and law enforcement officers in this country who have sacrificed so greatly in these difficult times.

But sharp edges aside, this Trump speech marks a turn-around. So we can probably expect more scripted autocue performances in the weeks to come.

When you are ready to re-energise your public speaking, you can attend a public speaking course organised by Time to Market. You can join a scheduled course at one of more than 40 training centres in the UK. Or, perhaps you might choose a one-to-one coaching session. Please don't hesitate to call and discuss further.