Nick Clegg was a whole 15 minutes late for his first speech as Deputy Prime Minister. Not a good start. Apparently he’s always late. That’s something he should aim to fix now he’s in government. We note the Baroness Scotland speech, where her late arrival really did upset her hosts.But it wasn’t just his Tweedledum timekeeping that was a problem. Because he chose the City and Islington College as his venue for his first Tweedledems speech to outline his plans for the Parliament. Not Parliament itself. Note, of course that we have this Alex Salmond speech to thank for the Tweedledum allusion. 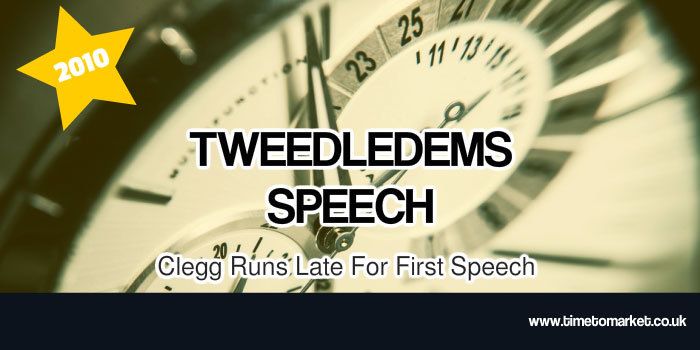 As a venue the College was undeniably perfect for an overview of this Government’s plans. But as an auditorium it was hopeless. Since, behind the speaker was a clear view over the adjoining street with passers-by and vehicles moving through the vision. Distracting.

Repetition In This First Tweedledems Speech In Government

However in his first Tweedledems speech as Deputy Prime Minister, Nick Clegg made good use of repetition right from the start. A popular phrase was:

“This government is going to”

Equally, he made frequent use of the word, “new.” Again, no surprise.

The structure to this brief speech was good. Using alliteration, He noted that the Government would take three steps:

He then referred to each step and made sure that his audience knew which step he was talking about. Very good structure signals.

His hand movement was excitable and jabby…betraying, perhaps, an inner edginess. I sense that he could introduce more tone and fewer hand movements. Because if he can do this he will achieve a better effect.

He read well from his script. But I thought that the lectern was set too low for him. So there were some stumbles. These didn’t distract him. He kept going.

Moments for hilarity didn’t take off. A reference to 150 years of mooted reform of the House of Lords was followed with, “the time for talk is over” and then his announcement of another committee! Wonderfully poignant. Just what’s needed. A committee.

But, we did note some fine phrase reversals:

His vocabulary was at times annoying. Audiences do tire of things being “brought forward.” Again and again.

I’d recommend that he try to introduce, implement, table, discuss, initiate, start, begin or kick-off some initiatives. It’s time for a change!

He handled evidence and analogies with the likes of Switzerland and the USA. Perhaps the Swiss politics analogy could be reviewed in terms of impeccable Swiss timekeeping? Just a thought.

His conclusion was brief. But he made the point: A fair society. Because that was his manifesto speech pledge.

A good first Tweedledems speech as Deputy Prime Minister…even if he was late.

You can also read plenty of tips for speakers with our regular series of public speaking tips, hints and suggestions. And, when you are ready to take your public speaking skills further, don’t forget that a day’s training could be just the tonic you need. Please don’t hesitate to get in touch when the time is right.