Speeches worldwide marked the last Armistice Day before the centenary of the outbreak of the Great War. Australian commemorations were led with ceremonies in Melbourne at the Shrine of Remembrance and in Canberra at the national Remembrance Day service. Paul Keating, the former Prime Minister, attended this event where he gave a short reprise of his unknown soldier speech. 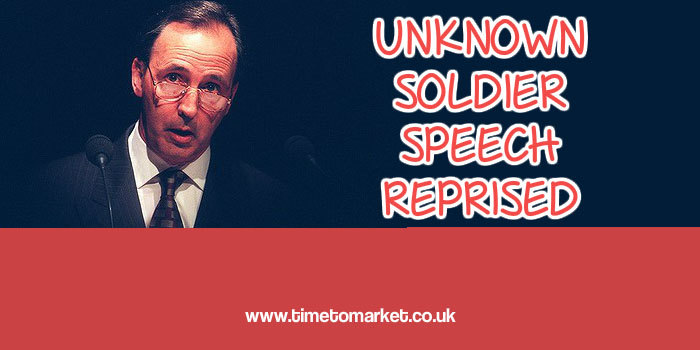 He began his speech with an impeccable historical introduction:

Nine months from now, 100 years ago, the horror of all ages came together to open the curtain on mankind’s greatest century of violence – the 20th century.

So, his speech noted how today’s youth were unlikely to face the nationalist urge for war faced by young men nearly a hundred years ago…let alone be dragooned into fighting a war in Europe. That has to be progress of sorts.

It is difficult to imagine these days, young Europeans going into combat for the European Commission, or at a stretch, the European Parliament.

Years after finishing his term as Prime Minister he remains a captivating speaker.

The virulent European disease of cultural nationalism and ethnic atavism not only destroyed Europe, it destroyed the equilibrium of the world.

Metaphor and word choice were impeccable.

It was a dignified and very moving speech that set out both the futility of much of the world wars. But, at the same time he lauded the sacrifice, bravery and human spirit of the combatants.

Then, the structure of his unknown soldier speech also proved useful. Since, it allowed him to explore Australia’s contribution to the world wars with quiet passion and dignity.

Hence, his 1993 speech is well worth a listen as we mark Remembrance Day today.

The country warmed to his oratory that November day. And so it was today, 20 years on, he unveiled a small brass plaque to commemorate that speech at the Australian War Memorial.