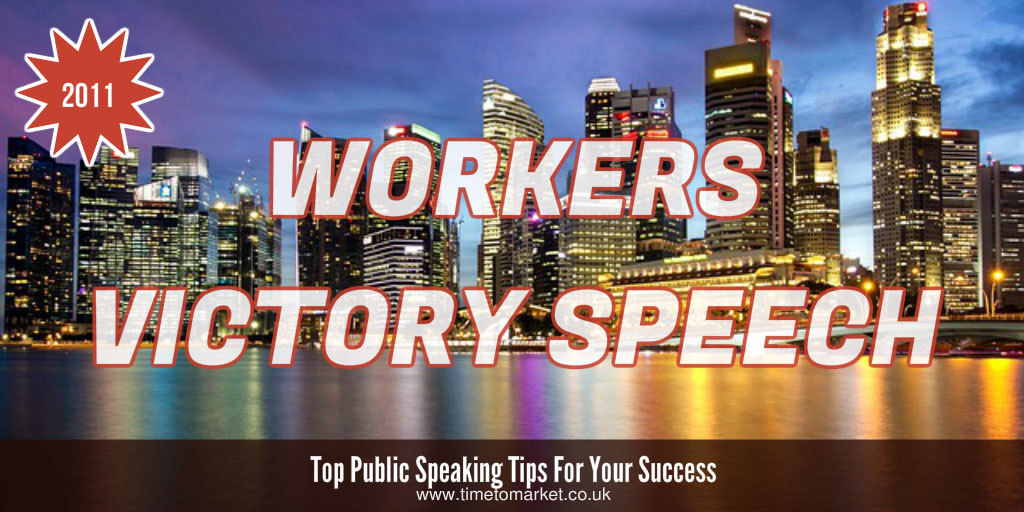 In chaotic, boisterous and good-natured scenes the Workers’ Party Leader gave a victory speech that marked this achievement. At stake, of course, had been the Aljunied Group Representation Constituency in the North-East of Singapore. And the significance? Well, it’s the first Group Representation Constituency that any opposition party has won. So, this buoyant victory speech made that very clear.

You have made history tonight. This is a political landmark in modern Singapore. Your courage has been a real breakthrough for future generations.

Over the uproar of his supporters this workers victory speech contained some excellent use of repetition, that went largely unnoticed in the din:

Your votes tell us that the Government that you want is a home, not just a house.

Your votes tell us that you want Singapore to grow and develop as a nation.

His conclusion, however, veered towards the hackneyed expressions of a reality television contestant:

Singapore is taking a step forward on a journey. Let us walk this journey together towards a First World Parliament.

That wasn’t very pretty at all! And to cap it all, his supporters then started to chant, UK football style. A good-natured but unattractive finale to his landmark victory speech.

You can discover plenty of public speaking tips for your next victory speech or, indeed office workers party speech. And with more than 100 top tips for speakers and presenters, there’s something for every event. Plus, when you are ready to develop your own speaker credentials, then why not consider training. Because a well-earned training session will pay dividends with your confidence and skills. So, when the time is right, please don’t hesitate to get in touch.