Alex Salmond launched the SNP election 2010 Manifesto in Glasgow this week with a comparatively quiet speech. As he shared the platform with colleagues John Mason and Nicola Sturgeon this Alex Salmond manifesto speech noted how the possibility of a hung Parliament had become a near probability. 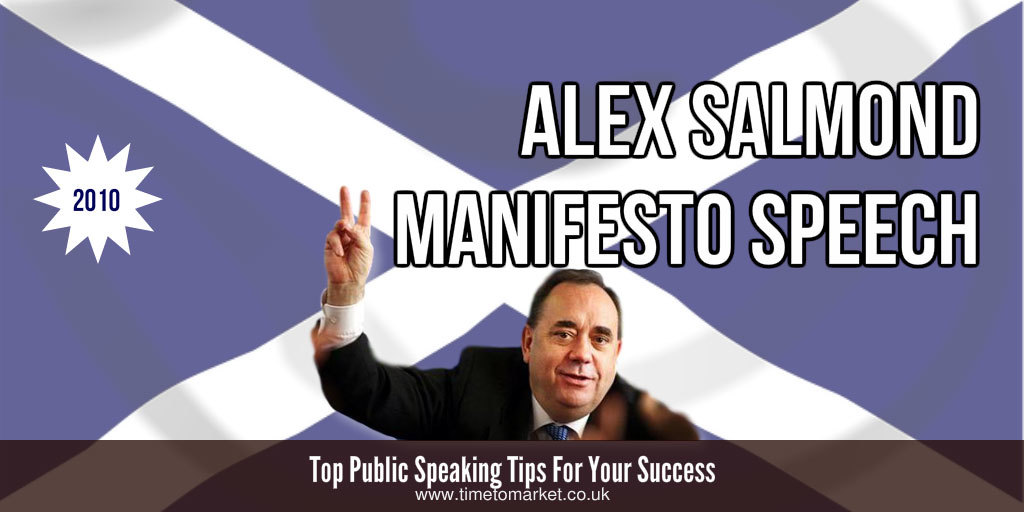 Working harder, he noted that a “Balanced Parliament” would be a “People’s Parliament.”

But this Alex Salmond manifesto speech was not bursting with the rhetorical devices of previous public events. However, he neatly referenced the Alex Salmond speech at the Spring Conference with asides about “Tweedledee,” “Tweedledum” and the “Tweedledems.” A topical touch.

His theme from that Spring Conference Speech, Rage Against the Machine, was also brought into play in this manifesto speech. The Westminster machine; a London-based system of politics that does the Scots no favours.

Manifesto Speech Gets The Big Cheer

His biggest cheer came with his words on ceasing the Trident missile programme.

This was far from a barnstorming performance. Subdued, measured and short. Not dissimilar to the manifesto that he brandished.

You can find a whole series of public speaking tips for your next manifesto speech, conference speech or presentation. Because with more than 100 top tips for speakers and presenters, there’s something here for every speaking occasion. And, when you feel the need to take your own public speaking skills that little bit further, then don’t forget that a skills course will always pay dividends. So, when the time is right, please don’t hesitate to get in touch.