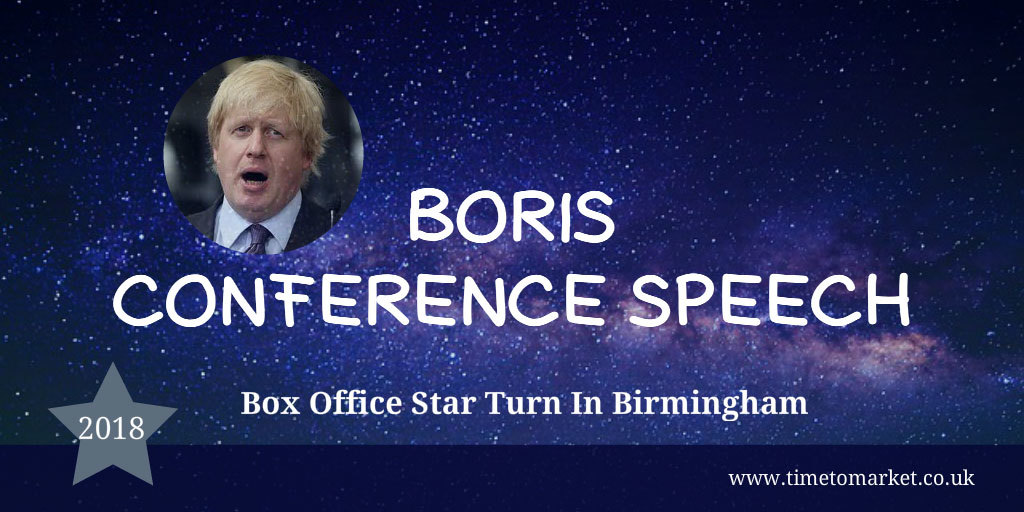 Because just about everyone at this conference knew this speech was coming. And they were interested. Even if many of them wouldn't say so to camera. It's unarguable, a Boris conference speech is the nearest that the Conservatives will come to Box Office in their lives. That's the way it is with Boris Johnson.

It's fair to say that this Boris conference speech didn't look anything really special. There was certainly none of the stage management deployed for the Jeremy Corbyn speech in Liverpool. Last year Boris had a haircut and he looked smooth and polished at conference. This year, in total contrast, he looked a shambles. Messy hair, a rumpled suit and a lumbering gait that suggests either too much consumption or too little exercise. I suspected that if you followed this leader, then you might not get far before his little legs gave way. But this wasn't a conference leadership speech. That's not yet on the cards.

Because this conference speech was about Boris forcing through some change. Change in attitudes, change in belief. And, perhaps, eventually a change in leadership.

Nonetheless, the excitement was palpable. And there's no other Conservative who commands such attention right now. After all, would you queue for upwards of three hours to listen to a Boris conference speech? On the conference fringe? Well, quite a few people did because they had to increase the venue's capacity to cope. Yes, that's box office.

So this Boris conference speech proved effective for his audience. They loved his language and they loved his delivery.

And that we should be so demoralised and so exhausted as to submit those institutions – forever – to foreign rule. If I have a function here today – it is to try, with all humility, to put some lead in the collective pencil, to stop what seems to me to be a ridiculous seeping away of our self-belief, and to invite you to feel realistic and justified confidence in what we can do.

Is there a secret to this Boris conference speech?

And that is why it is such a mistake for us to leave on the Chequers terms, locked in the tractor beam of Brussels. We will not only be prevented from offering our tariff schedules. We will be unable to make our own laws – to vary our regulatory framework for goods, agrifoods and much much more besides.

Yes, of course there is. It's Boris. You might well consider that the man's a fiction, an artificial creation or an act. Yes, that's probably true, to some extent. But you can't deny the sheer enthusiasm that his audience has for his words. And that's why this Boris conference speech was star quality.

You can always discover plenty of public speaking tips for your next conference speech with our series of tips, podcasts and videos. And with more than 100 tips, you'll find something for every conference occasion.

And when you need more help with your speeches, then please don't hesitate to get in touch about training or coaching. Because with more than 40 training centres in the UK, we are never that far away.