A Nick Clegg manifesto speech in London was the centre-piece for the launch of the Liberal Democrats election campaign in 2010. Nick Clegg used his speech to outline his approach to a fairer Britain. And the speech? Well, it was structurally sound. Not least because he used pointers and lists pretty well. 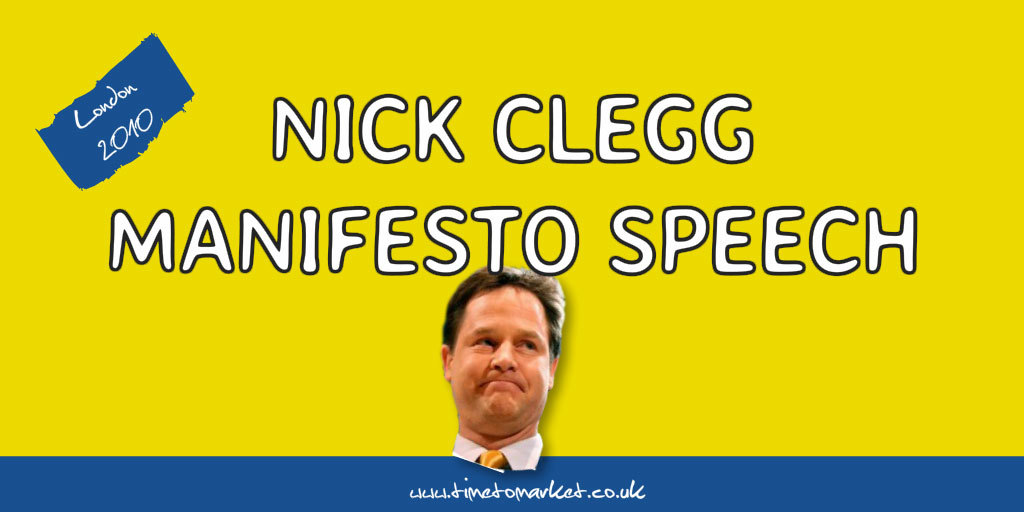 His introduction outlined his ideas for people to achieve their own potential without over interference. He labelled this “fairness.”

With this label he then laid out a four step plan. A plan, not a promise. Four steps that he described as, “specific, concrete, tangible.” So far, so good.

His speech made use of contrasts…a favourite device. For instance:

“Not to tell people how to live their lives.

But to make their choices possible.”

Speaking animatedly he made good use of his step structure, explaining each step as “fair.” And he finished the middle part of his speech with a series of forward looking contrasts:

We can turn anger into hope.

Recession into opportunity for everyone.”

His direct appeal to his audience came with a 3-part repetitive list of  “if you want” sentences:

“If you want practical help instead of empty words: this is a manifesto for you.

If you want a government that helps where it can and gets out of the way when it should: this is a manifesto for you.

If you want promises you can trust: this is a manifesto for you.”

His position taking finale reinforced the point that this was an election 2010 manifesto speech. No doubts:

“The two old parties have taught us to expect little from politicians and get less.

They have taught us to expect that elections are four weeks of being fobbed off with promises you know will be broken, and in the end you vote for the red team or the blue team, whichever you dislike the least.

Our manifesto says an emphatic No to that kind of politics.”

All in, this was a well-constructed Nick Clegg manifesto speech. Because it certainly made good use of a simple 4-part structure. And, of course his audience was left in no doubt that his theme was “fairness.” Just compare this structured approach to that of the 14-minute Tory manifesto speech of 2019.