A Justin Bieber speech by the diminutive star at the MTV Video Music Awards has stirred up a whole lot of trouble. A whole lot of trouble for what he didn’t say. Typically a star’s speech at one of these events isn’t minutely dissected. In fact most of their speeches are uniquely forgettable. But on this occasion it’s what Justin Bieber didn’t say that’s attracted the attention. 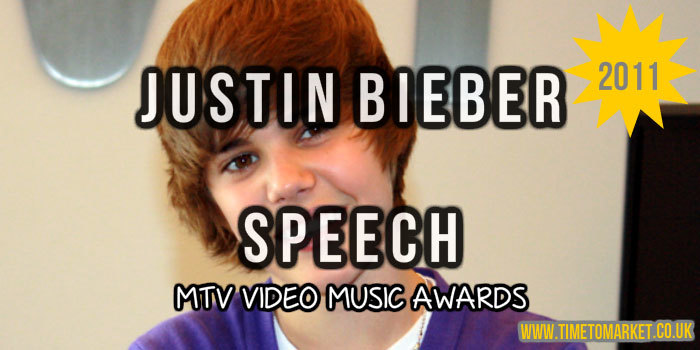 In thanking everyone associated with his success this year he failed to mention his girlfriend, Selena Gomez. So, rather than this being an instance of what not to say in a speech, this is a case of what’s missed.  Should he have mentioned Selena? Well, many of the stars of music and theatre do pay homage to their loved ones. And sometimes it’s sickening to listen to them. Do you remember Catherine Zeta-Jones’s speech at the Tony Awards in 2010? Exactly.

Justin Bieber Speech Says It All. Well Nearly All

Still, Justin Bieber’s speech failed to mention either Selena Gomez or his fans, and that seems to be the big issue. But we should just take a look at how he did say thank you in the speech: