Mayor of New York, Michael Bloomberg, has proved again that he’s no slouch when it comes to technology. One of the richest men in the United States he made his money selling information display systems. And his current display system of choice? An iPad. That’s because a new iPad was spotted in New York this week helping in a Mayor Bloomberg speech. 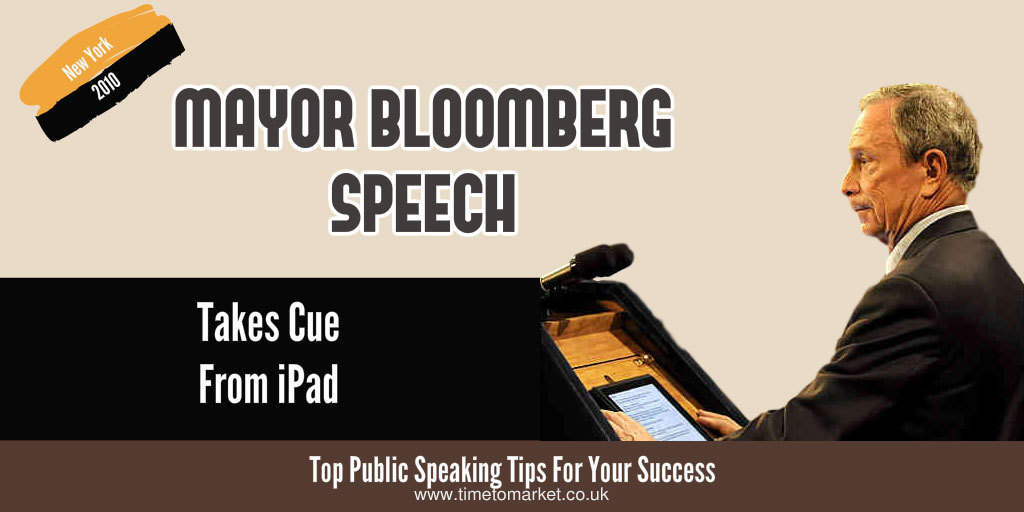 Mayor Bloomberg Speech Is Cued With A New iPad

He’s using an iPad to help him organise his office, his schedule and no doubt his life. And, importantly, he’s using the iPad to help him with his speeches. That’s great news. Not least because it reinforces the feeling that speakers are actively looking for alternatives to PowerPoint and other innovative ways to present.

Using a back lit iPad has its advantages in a darkened auditorium. And it’s apparently not much different to using an autocue; a device with which the Mayor should be familiar. Of course, the iPad in the Mayor Bloomberg speech sits on his lectern. And, consequently it’s well below eye level. So, already there’s a clear difference between the iPad as a speaker aid and autocue. However there are clearly some advantages. Because otherwise we can’t imagine that Mayor Bloomberg would use the iPad for his speech. So, those advantages probably include:

And, of course, those advantages probably count for a lot with a busy man like Mayor Bloomberg and his speeches.

However, the big question remains. Is the iPad still cool now it’s been spotted as a speaker aid?

You can discover a whole series of public speaking tips to help you get ready for your next speech. So, if you need to snatch some speech practice or work out how long should your speech be, then we’ve got the essential tips for you. Plus, when you are ready to boost your own public speaking skills that extra mile, then you can always consider training. Because a well-earned training course will always boost your chances at your next conference. So, when the time is right, please don’t hesitate to get in touch.