A short speech by the Deputy Prime Minister, Nick Clegg, took the theme of a perceived obsession with short termism. Titled, Horizon Shift, this Nick Clegg speech aims to debunk this obsession and explain why the UK’s coalition Government has an eye upon a longer term horizon. 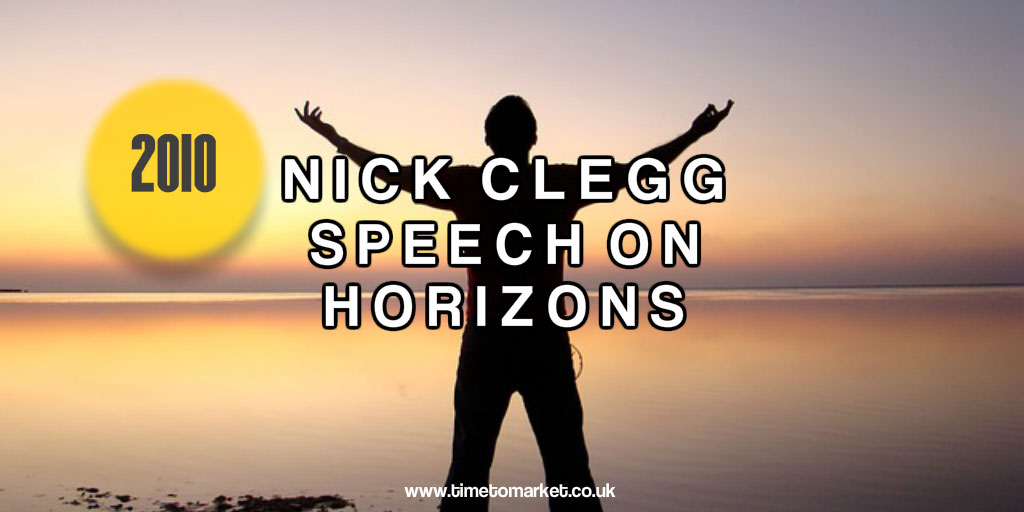 The Deputy Prime Minister is fond of lists. Lots of lists. He uses them to add structure to his speeches. And he also uses them to finish off some very simple sentences. Speaking about the last Labour government:

“A directionless government, without the underpinning of a clear purpose, inevitably ended in factionalism, intrigue and bankruptcy.”

The structure of the speech was sound. Nick Clegg laid out a five-part structure that he would follow. And follow it he did.

But his liking for lists did get the better of him when he came to his fifth point…which comprised a seven-part list! If this had been a PowerPoint presentation his audience might have succumbed at this point. Death by PowerPoint, perhaps?

In addition to the lists the speaker found space for a classical simile:

“Like Ulysses…we will be tempted by Siren songs, and we must sometimes tie ourselves to the mast.”

This particular classical simile does of course continue with the inevitable shipwreck of Ulysses. Then, the loss of all his men and Ulysses’s capture as a love slave by Calypso for seven long years. Ah, the joys of the long term…and selective quoting. Still, it makes some change from the stormy metaphors of a George Osborne speech.

Nick Clegg Speech Aims To Quote, If Not To Please

Quotations were plentiful. So, we spotted quotes from John Stuart Mill and Oscar Wilde. There was one from Benjamin Disraeli, an unnamed American actress and Janet Andersen. In fact there was a whole palette of political wisdom for this coalition Government.

It’s hard to argue against anything the Deputy Prime Minister actually said. None of his ideas were inherently bad. No, this was certainly a vision speech. But, problematically, it was a vision speech that contained a bit too much flannel and not enough substance. Because reality can be harder. So, that’s why Keynes had a view on the long term:

Human nature supports the short term…that’s really what it’s all about.

Of course when you have some speech aims that you want to achieve you can always discover plenty of tips for public speaking from Time to Market. And with more than 100 tips available, there’s surely something for every speech opportunity. And when your horizons stretch that little bit further, then you can also consider more specialist public speaking training. Because a public speaking course or coaching session is a ready route to public speaking confidence. So, when the time is right, then please don’t hesitate to get in touch.